Wikipedia lists "grated yam" as an ingredient of okonomiyaki. Is it a particular type of yam? Can it be purchased outside of Japan?

== More Info ==
As Mein suggested, I did some more searching on Wikipedia and the internets.

The "yam" in question is Dioscorea opposita or Japanese mountain yam. In Japanese it is known as yamaimo (kanji: 山芋; hiragana: やまいも).

Unlike other yam varieties, dioscorea opposita doesn't need to be cooked before consumption. (Most yams contain harmful substances in their raw state.) The dioscorea opposita still contains "oxalate crystals" in the skin which can irritate the skin. 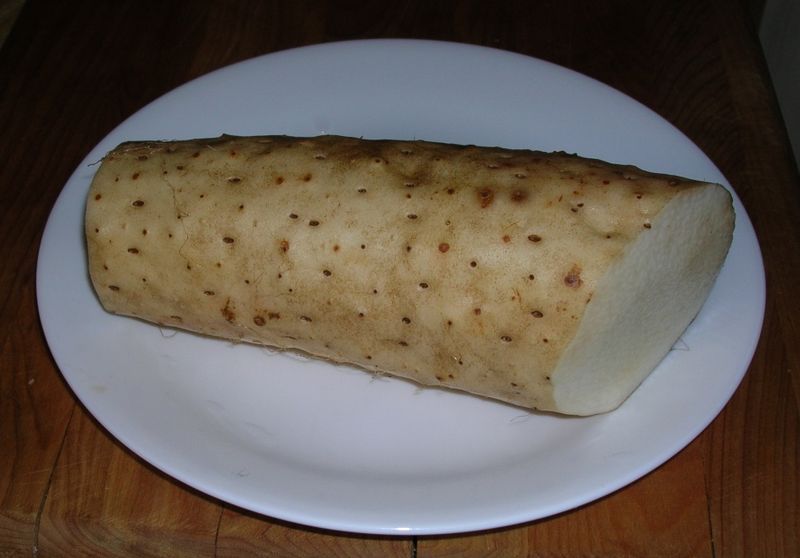 This video shows the yam being grated. I've seen this yam grated before and the grated result was very slimy and gooey.

The grater used for yamaimo is different to western style graters. Oroshigane graters have small spikes on the grating surface.

There may be more than one variety of Japanese mountain yam. I saw a reference (now lost) to a variety with dark skin.

It's "a slimy potato" - http://en.m.wikipedia.org/wiki/Dioscorea_opposita. It might be available in Asian grocery stores.

You could probably get by without it. Okonomiyaki translates literally as "cook as you like it". It's a savory pancake-like batter, to which is added whatever you want; often whatever you happen to have lying around the kitchen. Much like an omelette, okonomiyaki is a pretty free form thing.