I have built an SSIS ETL to integrate various data sources (one from MySQL, two from SQL Server) into a single SQL Server relational and normalized database, which I've called [NDS].

The SSIS ETL handles type-2 updates, and so the [NDS] generates surrogate keys and SCD tables include an [_EffectiveFrom] timestamp and a nullable [_EffectiveTo] column, and there are constraints for the natural keys and beautiful foreign keys linking all the data together.

Now, I wanted to build an SSAS dimensional database off of it, and it didn't take too long before I realized I was setting myself up for a snowflake schema: 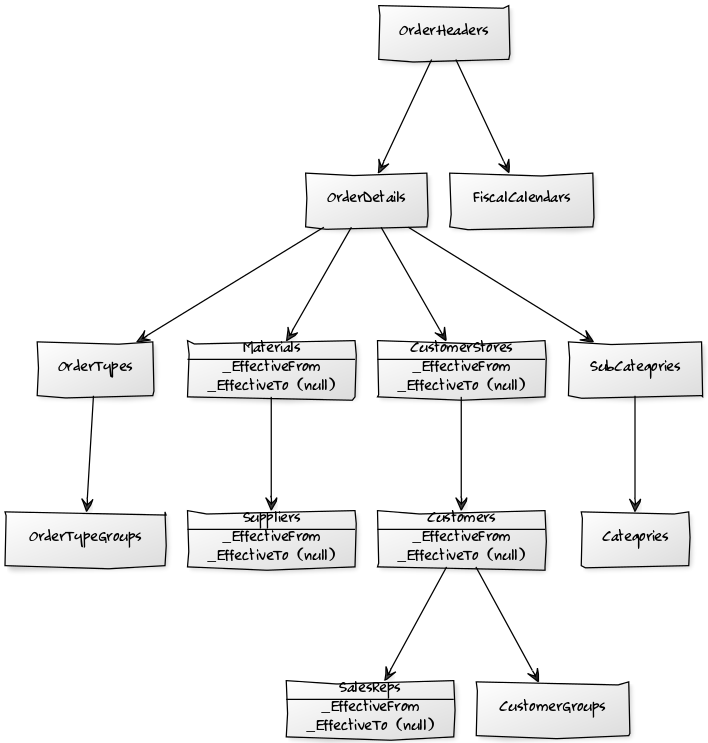 So I'm thinking of adding a new [DDS] (relational) database, to create the actual dimension and fact tables that will feed the DSV's for the SSAS db.

This [DDS] database would be as denormalized as humanly possible, so as to "flatten" the facts and dimensions (like, [OrderHeaders]+[OrderDetails] into an [Orders] fact table, and [CustomerStores]+[Customers]+[SalesReps] into some [Customers] dimension table) – doing this should not only make it easier for me to build the dimension hierarchies in SSAS, it should also make it easier to come up with an actual star schema.

I have a few questions though:

Am I setting myself up for a Big Mess™, or I'm on the right track?

As you are seeing, one of the benefits of Kimball Dimensional Modeling is that the data warehouse design is essentially your SSAS design. While there are always exceptions, you can typically select a table in the DSV and immediately move to hierarchy design, cube relationships etc.

I'd recommend moving to the DDS with the caveat that you phase out the NDS. For the simple reason that you mention with the SCD Type II - there's no reason to duplicate all of that data, ETL, and code base. Keeping both leads to an overly complex solution with a lot of maintenance and risk - this is the primary Big Mess™ you need to avoid.

The alternative design I'd suggest only if you have small quantities of data, no significant expectation of increases, and no capacity to switch to the data warehouse. This suggestion ultimately includes a lot of the design work that would otherwise go into the DW and as such is similar to keeping the NDS and creating the DDS:

You can create your cubes with queries manifested as Views or hard-coded into the DSV.

It sounds like you overcame a lot of hurdles and created a great functional solution with the NDS. Unfortunately what it doesn't do are two important things that dimensional modeling provides: simple query patterns and easy translation into multidimensional analytics. Thankfully, a lot of the ETL design is likely useful as a template or starting point for loading a different table structure.