So, I have 3 tables that I am attempting to get counts for based on a groupid, and a task code. There are a few issues I am having as some of the relationships are many to one, which I think is somehow inflating my counts. I will list my 3 tables with the pertinent attributes.

edate -need to use to get one record

groupid- used to group the task_code to get count

I have been attempting to run a number of queries, but the counts I am getting back do not look correct. I am concerned that it is somehow returning more than one instance of the m_id somehow? Here is the query in question:

If I add 'edate = (select max(edate) from task_table)' in the where clause, it returns an empty table.

I am unsure how to incorporate edate to get only the newest record that fits the criteria in the where clause. The reason I think I want to use this is because there could be more than one sol_id that is associated with a m_id, so i'd just like to include only the newest record with a cur_id in the count. Thank you for your time.

looking at these tables, the result should look like the following

mmm based on your sample date your query is not wrong. but your expected results are wrong. 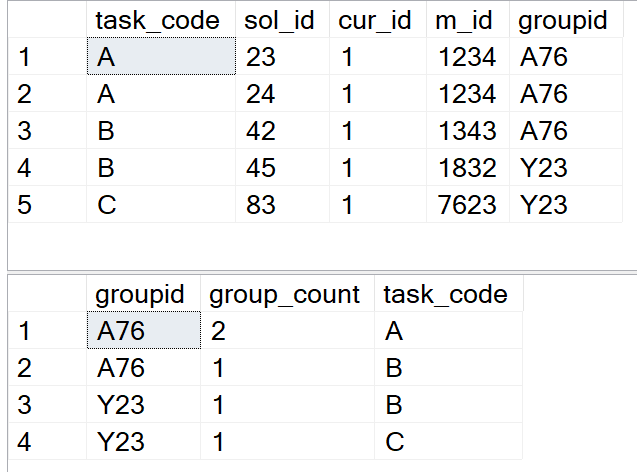