@Offset is set before @UTC, yet it sometimes has a later value. (I've tried this on SQL Server 2008 R2 and SQL Server 2016. You have to run it a few times to catch the suspect occurrences.)

This does not appear to be simply a matter of rounding or lack of precision. (In fact, I think the rounding is what "fixes" the issue occasionally.) The values for a sample run are as follows:

So datetime precision allows the .880 as a valid value.

Even Microsoft's GETUTCDATE examples show the SYS* values being later than the older methods, despite being SELECTed earlier:

I presume this is because they come from different underlying system information. Can anyone confirm and provide details?

Microsoft's SYSDATETIMEOFFSET documentation says "SQL Server obtains the date and time values by using the GetSystemTimeAsFileTime() Windows API" (thanks srutzky), but their GETUTCDATE documentation is much less specific, saying only that the "value is derived from the operating system of the computer on which the instance of SQL Server is running".

(This isn't entirely academic. I ran into a minor issue caused by this. I was upgrading some procedures to use SYSDATETIMEOFFSET instead of GETUTCDATE, in hopes for greater precision in the future, but I started to get odd ordering because other procedures were still using GETUTCDATE and occasionally "jumping ahead" of my converted procedures in the logs.)

The issue is a combination of datatype granularity / accuracy and source of the values.

First, DATETIME is only accurate / granular to every 3 milliseconds. Hence, converting from a more precise datatype such as DATETIMEOFFSET or DATETIME2 won't just round up or down to the nearest millisecond, it could be 2 milliseconds different.

Second, the documentation seems to imply a difference in where the values come from. The SYS* functions use the high-precision FileTime functions.

while the GETUTCDATE documentation states:

This value is derived from the operating system of the computer on which the instance of SQL Server is running.

Then, in the About Time documentation, a chart shows the following two (of several) types:

Additional clues are in the .NET documentation for the StopWatch class (emphasis in bold italics mine):

Hence, there are different "types" of times that have both different precisions and different sources.

But, even if that is a very loose logic, testing both types of functions as sources for the DATETIME value proves it. The following adaptation of the query from the question shows this behavior:

As you can see in the above results, UTC and UTC2 are both DATETIME datatypes. @UTC2 is set via SYSUTCDATETIME() and is set after @Offset (also taken from a SYS* function), but prior to @UTC which is set via GETUTCDATE(). Yet, @UTC2 appears to come before @UTC. The OFFSET part of this is completely unrelated to anything.

HOWEVER, to be fair, this still isn't proof in a strict sense. @MartinSmith traced the GETUTCDATE() call and found the following: 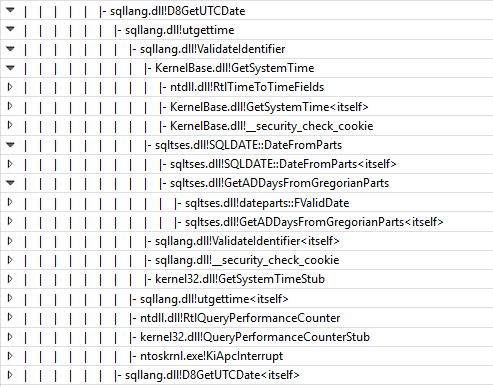 I see three interesting things in this call stack:

There is much good info here regarding the different types of time, different sources, drift, etc: Acquiring high-resolution time stamps.

However, if you have DATETIME datatypes, then you should use the SYS* functions as the source as they are more accurate, even if you lose some precision as the value is forced into a less precise type. And along those lines, it seems to make more sense to use SYSUTCDATETIME() rather than call SYSDATETIMEOFFSET() only to adjust it via SWITCHOFFSET(@Offset, 0).