I want to create an Inductance meter with an arduino nano, for that I follow
that link whose theory convinced me : tutorial

(The Diode on schematic remove analog negative voltage, Edit: I have wrong, excuse me surely for prevent inductor negative voltage because out signal not contain diode or maybe in the comparator ?) and then the comparator
convert it into square wave based on ON/OFF DC ?
Getting wavelenght or pulse in time and then calculating resonant frequency
and finally the inductor value based on known capacitors values.

This tutorial use an LM339N comparator, but I learn an I read : op-amp can be used as comparator.

My goal is to create an Inductance meter for 'nH' unit… I learn, I read but i'm confuse.
Also, I know the discharge inductor can create a big negative voltage spike.
I would not want to burn my arduino (perhaps the diode is here for that), that's why I'm always on the theoretical part.

Thank's for your help. 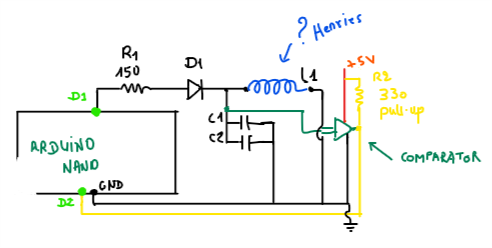 There are many ways to perform this measurement but when it comes down to nH accuracy every mm of trace length counts as adds 0.5~1 nH/mm.

The Op Amp must support the current and bandwidth required to drive the low impedance of nH ranges.

Another possible method is to use a linear LC oscillator , limiter and 8 bit binary binary counter to lower the frequency measurement.