I made a regenerative receiver by slightly modifying the design at http://www.ke3ij.com/am-univ.htm to match the design below and with the right part combination I managed to pick up many stations including many FM stations within a 60km radius and even a local TV station (cable channel 12) within approx 10km radius thanks to the invention of a trimmer capacitor that I constantly played with.

I read that resonant frequency is calculated as:

\$f = \frac{1}{2 \pi \sqrt{L C}}\$, but I think with my circuit there is a catch because if I tune my trimmer too far, I start to hear internal oscillation (actual noise). Also, if I set the capacitor connected between emitter and collector of PN3563 incorrectly, then I'll get either no sound or noise.

I don't know the math to calculate bandwidth, and I think I can use the standard formula I typed above to calculate frequency.

Also, the part values are not set in stone except for the PN3563 since I am still experimenting. 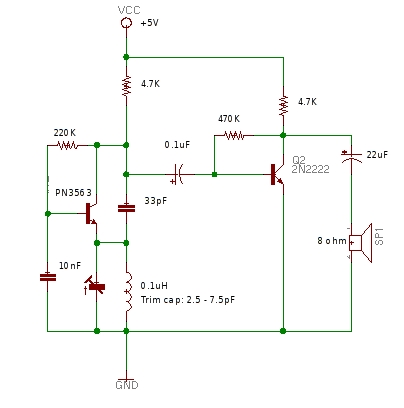 There is probably no easy analytic expression for the bandwidth, as this is a regenerative receiver, which in addition to the tuning control, would normally have a "reaction" control (in 1920s jargon) to adjust the positive feedback.

There are two resistances to consider when calculating the Q of your tuned circuit, and therefore the bandwidth : the series resistance (which as you guess is mainly the resistance of the coil itself) and also the load resistance in parallel with the tuned circuit - which would include the input impedance of amplifier Q2.

(You will often see external connections to taps covering a small fraction of the inductor - at 1/N, maybe 1/10 or 1/4 of the total turns. These use the inductor as an auto-transformer to transform up the load resistance by N^2 (16x or 100x) across the whole inductor, reducing external loading, increasing Q, and so reducing bandwidth.)

But then, having calculated the Q of the tuned circuit itself, you find it increased by the reaction (positive feedback) via Q1, which depends on the current gain of the Q1 stage, which would normally be variable for the purpose.

How do you control the reaction in your modified circuit? The original circuit had a control (labelled REGEN) and the instructions on the linked page warn you that you need to reduce the positive feedback towards the high frequency end of the tuning capacitor's range.

It looks as if you have fixed Q1's base current via the 220K resistor, when you probably want it to be adjustable as in the original circuit. This will allow you to resolve the problem you notice when you tune the trimmer "too far".

It's not a "feature" of the original circuit but an essential part of the design. As the linked page notes, with the reaction control advanced too far, the circuit operates as a transmitter, inducing howling noises to spoil your neighbours' enjoyment of the program.

As the 1928 BBC Handbook says,"The good listener does not oscillate". 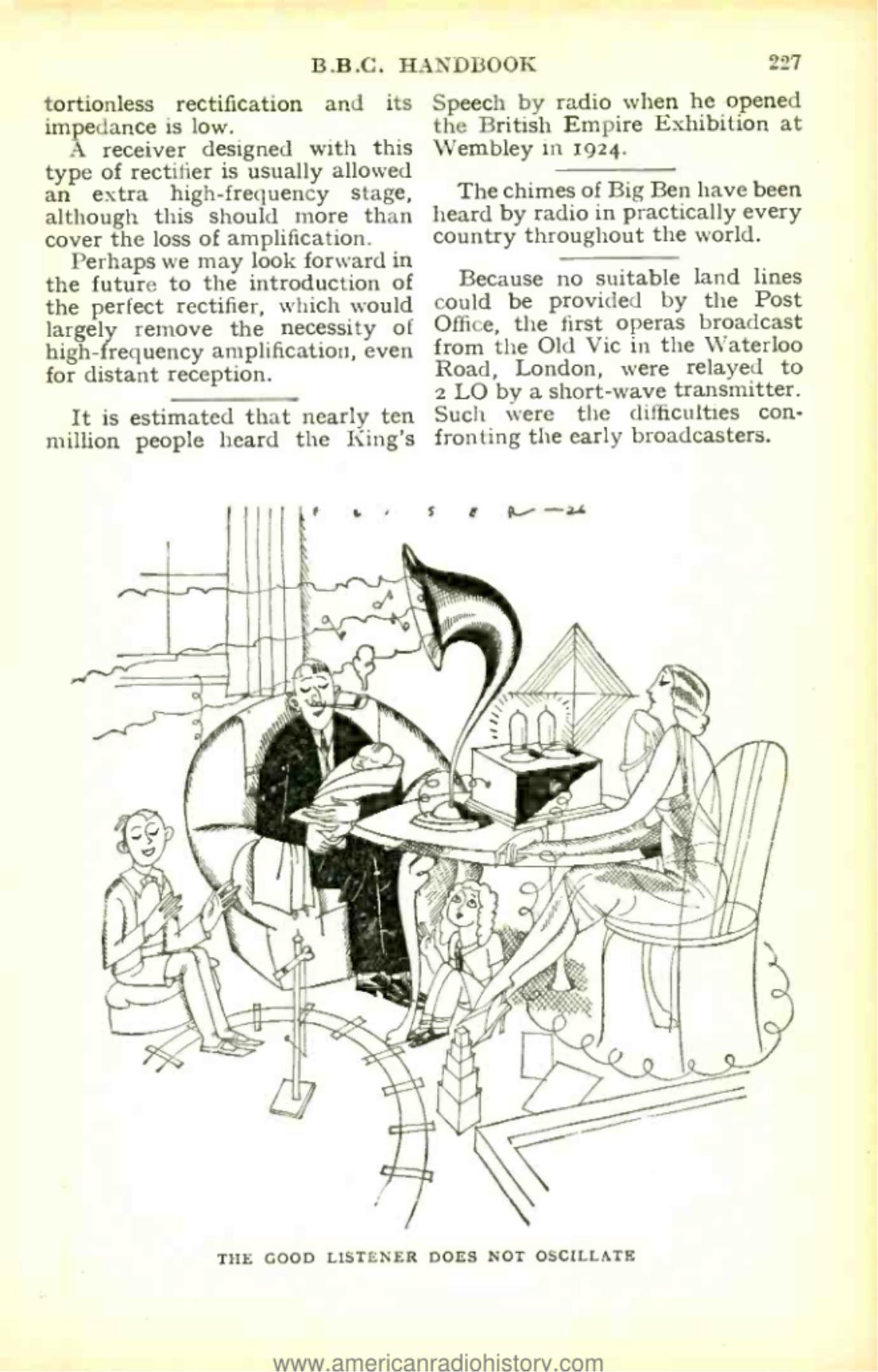 Dual adjustments, for tuning and reaction, were perfectly normal with this type of receiver, which lost popularity because the more complex superhet is simpler to use.