I am trying to understand the advantage of using a voltage-controlled current source (VCCS) to drive the bias current inputs of an LM13700 OTA, compared to a simple application of the control voltage (CV) directly through a resistor connected to the bias input.

As I understand it, if the bias current input of the LM13700 sits two diode drops above the negative supply rail, then the easiest possible thing to do is calculate a current limiting resistor that yields a bias current around the maximum 2mA for the largest expected CV. This seems to be the approach taken by all the example circuits in the LM13700 datasheet and numerous other OTA design resources, with the assumption that the CV applied to the resistor comes from a low impedance source.

My understanding is that if we want to control the bias current exponentially, then it makes perfect sense to use a linear CV an exponential VCCS, as the control current would be less susceptible to noise than trying to generate exponential voltages directly. But what is the advantage that justifies the added complexity in the case of a linear VCCS like the one proposed in Musical Applications of Microprocessors p203 for biasing the 3080 OTA 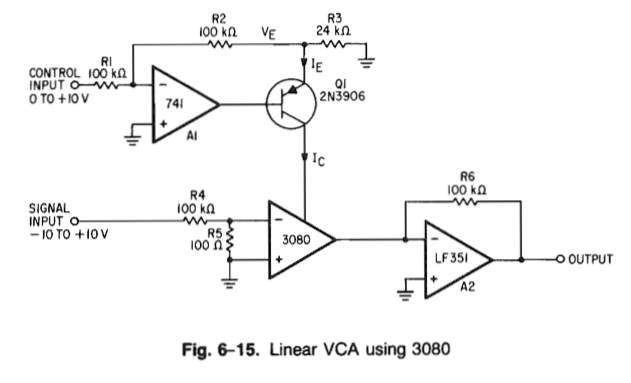 The only one I can think of suits the need to drive multiple bias current inputs from the same CV, where we can connect more transistors in parallel and source the same amount of current from each, without dividing the current between multiple current limiting resistors (though I suppose we could also just lower the current limiting resistor values). Are there other advantages?

Moreover, I've seen another approach I don't quite understand in some Moog schematics, where the CVs are applied through a resistor following an op amp voltage buffer connected to a BJT common base current buffer. Why exactly is the current buffer necessary/desirable here?

I believe the ideal OTA circuit has high open loop gain, high slew rate and and high bandwidth with low power consumption, high SNR and dynamic range and superior linearity. But this leads to tradeoffs for bias current, power , linearity and speed.