As the title suggests, I am curious where the term came from. A twenty-minute Google search did not yield any useful results.

More specifically, I am wondering why the word "cheap" was used.

Etymonline says about cheap and cheap shot that

Sense of "lightly esteemed, common" is from 1590s….
Cheap shot originally was U.S. football jargon for a head-on tackle; extended sense "unfair hit" in politics, etc. is by 1970.

But in Esquire, 1966, the etymology at Etymonline is contradicted by a letter-writer:

So the sense given by Etymonline for both cheap and cheap shot doesn't seem to be correct.

The phrase 'cheap shot' in the literal sense of inexpensive "Projectiles (esp. balls or bullets, as distinguished from explosive ‘shells’) designed to be discharged from a firearm or cannon by the force of an explosive" (OED Online) does not appear in the sources I checked (free online popular news archives, Google Books, OED Online) until 1864:

Earlier attestations of the phrase 'cheap shot' with reference to the action of shooting (a 'shot'), specifically in the sense of "9. a. An attempt to hit with a projectile discharged from a gun. ....", include two that draw on sense 9b, the figurative sense derived from 9a:

b. fig. A remark aimed at some one, esp. in order to wound. Sometimes with mixture of sense 14b. Also cheap shot (N. Amer. colloq.).

Elsewhere than in OED Online, 'cheap shot' is defined more generally to include actions as well as remarks. Such definitions more accurately reflect the range of figurative senses I am familiar with:

cheap shot n.
1. (in sports) a blow, shove, or tackle maliciously directed against an opponent who is defenseless or off guard.
2. any mean or unsportsmanlike remark or action, esp. one directed at a defenseless or vulnerable person.

The sense of 'cheap' in the phrase, overall, is the figurative

That figurative sense of 'cheap' is often used disparagingly.

The first of the two early attestations may be interpreted as a literal reference to the two dollars spent for a shot that killed forty-seven ducks. However, the decades-long series of elaborations and reproductions of the story, in works such as More puniana; or, Thoughts wise and otherwhy's, 1875, suggest otherwise. 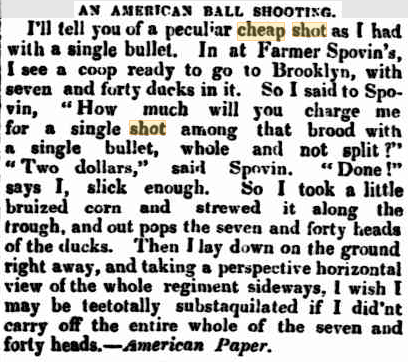 The second early attestation of the phrase, a 1918 use in figurative sense 9b, is quite evidently an elaborate pun: 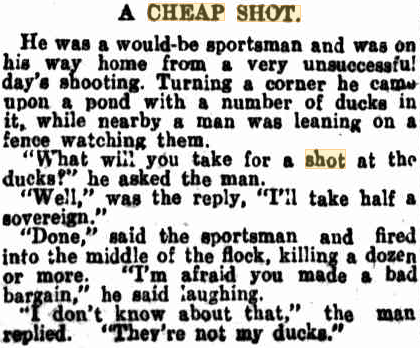 Chronologically between those two early attestations of the figurative sense 9b in anecdotal puns is this rather more prosaic 1896 use of the term in another British publication. Here the sense of 'cheap' is literal ('inexpensive') and the use of 'shot' is figurative:

Hard on the heels of the 1844 and 1918 uses of the term in figurative sense 9b comes a third such use, a slanted 1921 Australian use in a political context pertaining to religosity: 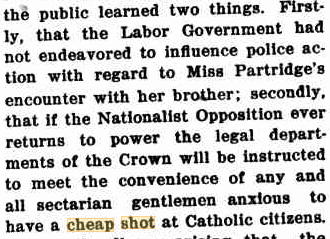 Later, in 1929, a use with reference to sports (hockey) appears. In this use, 'shot' has the extended literal sense of an 'attempt to hit with a projectile' (the goal with the hockey puck), while 'cheap' has the extended figurative sense of 'easily obtained' used somewhat disparagingly:

As the college boys connected first, on a rather cheap shot at that, the older fellows bore right in to even the count and they did.

Aside from uses in political contexts with disparaging reference to remarks in debates (Parliamentary Debates (Hansard): House of Commons Official Report, Volume 384, 1941), the next use I discovered was also a reference to sports—this time cricket:

The sense of that use is somewhat opaque to me, unfamiliar as I am with cricket jargon, but I surmise the use may be a more or less literal reference to 'shot' in the sense given earlier (9a), preceded by a figurative reference to 'cheap'.

Following the 120 year history of development shown above, uses with reference to professional US football and boxing began to make appearances in the 1960s. In these uses, the 'shot' is with a human body employed as a projectile, and the cheapness lies in the unexpected or sneaky nature of the hit. Along with those uses are others pertaining to discreditable actions and remarks:

Basing objections to a Trustee's fee on the time he expended in a case is an easy way to take a cheap shot.

...that sets it quite apart from the narrow, unsympathetic, cheap shot sniping that is characteristic of most caricature.

By the time the Vikings come in here next Sunday, every club in the league will know you've got a bad temper. So they will work on you. It won't be dirty. But you'll hear lots of conversation out there and if a guy gets a cheap shot at you, he'll ...

(The Running Back: A Novel of Professional Football, Hamilton Maule, 1966.)

I didn't take any cheap shot at Ryan. I was retiring. Why would I want to do something like that? But everything reverted to my original statement that I wanted another shot at him. It got all twisted around.

And in case we missed the cheap shot, it is carefully repeated in a flashback later on.

(Review of Existential Psychology and Psychiatry, 1967.)

"Clay at his cheap-shot worst" was the reaction of the Washington Post. "Contemptible!" "Cruel!" "Disgusting!" cried papers from Los Angeles to London. Once again the New York Times called for the abolition of boxing in an editorial.

CHEAP SHOT: A blow delivered to a player who is not in a position to defend himself. Players who specialize in such tactics are called cheap- shot artists. This category is further broken down to include back-shot artists and blind-siders.

In summary, the term 'cheap shot' has been in use with the meaning

an easily done and often discreditable action or remark

In later years, along with its other uses, the term came to be employed in sports, especially professional US football, where its meaning was applied to sport-specific actions and situations.