Asked this on ELL but with no answer:

What makes be an intransitive verb? How do we know that the analysis of It is me as transitive by tradtional grammars is incorrect?

And how does this analysis apply to other verbs, like hurt from the example below:

How to tell if hurt in It hurt me is a a predicative complement? "Hurt" can be replaced by other to be linking verbs (is, was etc.). Even though (is, was) are stative verbs and hurt is more of an action verb.

Then you have a list of verbs with multiple personalities: appear, feel,grow, look, prove, remain, smell, sound, taste, and turn. Sometimes these verbs are linking verbs; sometimes they are action verbs.

If you can substitute am, is, or are and the sentence still sounds logical, you have a linking verb on your hands.

If, after the substitution, the sentence makes no sense, you are dealing with an action verb instead.

Normally action verbs have direct objects, but nearly all verbs can be used as transitve and intransitive. For example the verb drive. Compare:

"He drives the car fast".

The first is a predicative complement, while the second is not as drives is being used transitively with its object "the car".

It was given to her

Her is an object because of the verb "given" being used transitively and is not a predicative complement.

It hurt me
It is me

According to above, can the verb "hurt" be a reporting verb relating the feelings of the subject like (I feel hurt) or (I am hurt) in "It hurt me", rather than an action verb?

Here is a useful link regarding subject movement and case theory. Particularly, the Specifier-head agreement section:

Note: We discuss the grammatical counterpart of (13b), He claims to be a rock star, in Chapter 7: Nonfinite clausal complementation.

Since the subordinate verb is a form of the same verb (namely, be) in both examples, the grammaticality contrast in (13) would remain mysterious if it were the verb that bears a nominative case feature. The obvious alternative is that nominative case is instead a feature of I—specifically, of finite I.

I am hurt or I feel hurt

poses the same problem as example (13). The pronoun me in both cases is known as the oblique form.

The answer is that the grammar of English requires subjects and objects to appear in a specific case form: 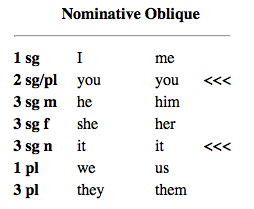 As is evident, both of the subjects in (2) are oblique forms, and both of the objects are nominative forms. Each of the sentences in (2) therefore contradicts the case requirement just stated in two ways.

As the leftward-pointing arrows in the table in (3) indicate, not all pronouns have distinct forms for the nominative and the oblique case. Full noun phrases in English also show no morphological distinction between nominative and oblique forms, as shown in (4).

In traditional grammar, the concept of case is apt to be equated with morphological case. But generative grammar is less interested in the case forms themselves than in their structural licensing conditions (that is, the conditions under which it is grammatical for them to appear). Consider (1), repeated here as (10), and (11).

As is evident, they and she exhibit distinct forms in the nominative and oblique, whereas you doesn't. But in generative grammar, the focus is not on this morphological difference, but instead on the fact that the form you appears in the same structural position as they and she in (11a), but as them and her in (11b). Contrary to superficial appearances, the two instances of you in (11) are therefore treated not as tokens of a single type, but rather as two grammatically distinct forms that happen to be homonymous.

Besides failing to express its case distinctions in a robust manner, English also exhibits a comparatively limited range of case forms: the nominative and the oblique just discussed, and the possessive. Other languages have more grammatical cases.

With simple transitive verbs, the situation is more complex. Such verbs are said to govern the case of their object. That is, depending on the verb, the object appears in the accusative, in the dative, or (rarely) in the genitive.

iib. [a friend of mine’s] father

In (iia) and (iib), we have 2 genitives: in (iia) one is again realised as my and the other as friend’s, whereas in (iib) they combine in the single word mine’s. Both me’s and mine’s thus have double-case marking, an inner case and an outer case. In me’s the inner case is accusative, required because the pronoun is object of the preposition opposite, while in (iib) the inner case is genitive because the pronoun is functioning in the oblique genitive construction. The phrasal genitive is the outer case, morphologically added to the form that realise the inner case. In examples like [the King of England’s] daughter, the inner case of England is the plain case, which has no morphological marking, but the principle is the same: the outer genitive is added to form required by England within the inner NP “the king of England”.

Prepositions, too, idiosyncratically govern the dative, the accusative, or (rarely) the genitive.


English does not have distinct prepositional forms of pronouns. The same set of object pronouns are used after verbs and prepositions (e.g. watch him, look at him).