Can anyone tell me where the phrase temper tantrum came from?

I found a couple of my usual online sources that just say "origin unknown".

I found the word tantrum itself in print back to 1675 in Charles Cotton's burlesque, The Scoffer Scoft. In this passage Bacchus recounts to Apollo how he was sodomized by Priapus (Greek god of fertility), who "tilt[ed] his Tantrum at [Bacchus'] Nock": 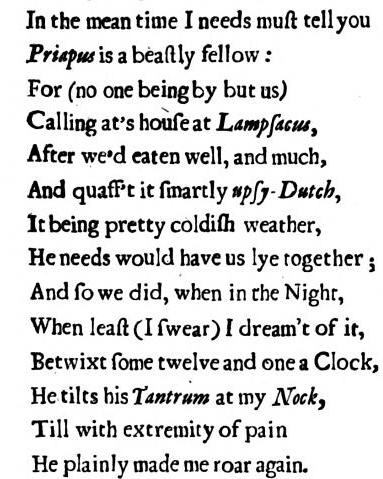 I searched "Tantrum at my Nock" and found it referenced in Farmer's and Henley's Slang and Its Analogues Past and Present, 1904, which has penis as a second definition of tantrum:

(Slang and Its Analogues also confirms nock as slang for the posterior.)

I can't find any other examples of this euphemistic use of tantrum, but the presence of Bacchus in this passage leads to other clues. From @F'x's "interesting read" link I gleaned this set of definitions of tantrum from Charles Mackay's The Gaelic Etymology of the Languages of Western Europe, 1877:

—A fit of ill-temper.

Pet or passion. Madam was in her tantrums. —Grose.

Tantrums, pranks, capers; from the tarantula dance. See the account of the involuntary frenzy and motions caused by the bite of the tarantula in the Penny Cyclopaedia.— Slang Dictionary.

The blogger of F'x's link dismisses the tarantula connection in favor of the Gaelic lead, but when I searched "tarantula dance" I found this in a 1783 collection of essays:

and this from Freaks and Follies of Fabledom, 1852:

So, if there is this connection between Bacchus and this ecstatic spider-bite dance, it seems plausible that Cotton's use of Tantrum above could be referencing this as well and thus point to an arachnological etymology. On the other hand, pet and hot & heavy work quite well for the euphemism, too.

A note on temper tantrum: I found this phrase back to a 1920 (check) publication referring to a psychiatric case at John Hopkins University from 1918 in Mental Hygiene vol. IV:

Interestingly, I found the words comma-separated as the fifth definition of flink in The English Dialect Dictionary from two decades earlier in 1900:

I think this adjacent use of the words in a such an authoritative work could have easily resulted in the coining of the phrase.