They seem nearly identical to me, but there's still clearly a difference, but I can't tell exactly what it is.

The difference between the two is semantic:

Hypothetically, having a difference between the two allows for the possibility of correct formatting for different situations, e.g. "1 FRACTION SLASH 2" could be rendered with a superscript 1 and a subscript 2 as 1/2. In practice this generally doesn't seem to be the case, but that capability was the original intent. From section 2.1 of Unicode Technical Note 28:

Here is a test, using SOLIDUS (U+002F), DIVISION SLASH (U+2215), and FRACTION SLASH (U+2044) in order (the following character sequences aren't necessarily semantically appropriate, the intent is only to illustrate rendering):

Depending on your browser and font you may or may not see a difference in rendering above. On my system, DIVISION SLASH and FRACTION SLASH render identically, although differently from SOLIDUS. They have a narrower spacing than SOLIDUS and look better with the superscript/subscript numbers.

For example, a comparison of the rendering in Chrome vs Internet Explorer / Edge is shown below: 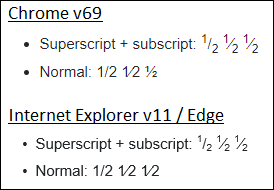 The advice I would give to you is this: If you are representing data and wish to be semantically accurate, use DIVISION SLASH and FRACTION SLASH appropriately. However, if you are typesetting and the rendering of either is giving you problems, or in casual communication, or in the presence of general doubt, just use SOLIDUS (the forward slash on your keyboard) instead. Also, if you are typesetting complex mathematical formulas, you may wish to consider using TeX or another dedicated typesetting system.

(And don't worry, I can't actually type this fast. I already typed up an answer waiting for you to ask this.)