I bought a Chinese SATA/IDE to USB converter that has no brand name. Specs for the power adapter are:

After connecting a 3.5" SATA HDD to my laptop via the converter, I sometimes get electric shocks from some parts of the laptop case.

The converter uses an AC adaptor with a cable like this: 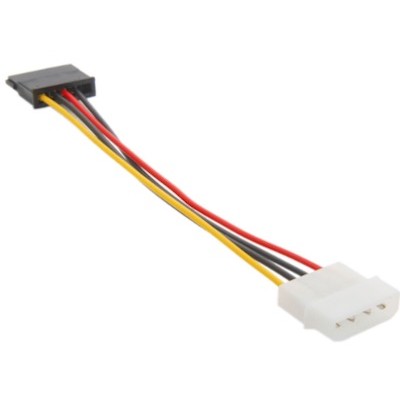 That uses 4 wires for powering an HDD. Some say that it would be dangerous for HDD because of the lack of one wire.

EDIT: Now shortly after I'm writing this, the adapter made a spark/bang noise and went off. It doesn't turn on again. How can I tell if it damaged my laptop through adaptor > HDD> USB?

The pictured adapter is not at fault... The missing wire is the 3.3v supply, and most hard drives can operate without it.

It will be the mains to Molex adapter that is dangerous.

If it was still working I'd suggest that you try unplugging your laptop from power (thus running on battery) - the "shocks" will likely go away.

Unfortunately too many cheap power supplies have this behaviour.

The fact that the supply has since died doesn't bode well either... Put it in the bin. Again, many cheap supplies aren't built to sensible standards, especially if they are imported or overly cheap.

It's going to be very difficult to determine if any damage has been done to your laptop or the hard disk. Try the USB port - if it works, then great.

I'd like to know what was the cause of electric shocks from laptop chassis minutes before the adaptor failed?

Fundamentally, the cause of the electric shocks is due to two things:

It's a complex topic, and not really suited to Super User... but it can be thought of like a ground loop.

It could be very well be caused by poor Class-Y capacitors, as discussed in this answer: https://electronics.stackexchange.com/a/216967/142242

What are the possible known/common damages that could have happened?

Ultimately a "bad" power supply like this can cause issues ranging from "almost nothing", through sparks, to death.

Do you recommend opening the adaptor to see and report its insides for further investigations?

The best you can do is report the issues to the seller. Due to the unbranded nature and flooding of the market with such supplies, there probably isn't anyone you can "go after" or even report it to.