Rather often, I see web pages with links to files that I want to open directly in gVim (when browsing with Firefox on Windows). Chrome-specific answer — also good to have.

Attempting to get this working, I was messing around with Firefox's Tools > Options > Applications settings (where it chooses what to do based on MIME type). To no avail. For most of these files (e.g. Python source files), clicking on them brings up the "Opening filename.py" dialog with the options "Open with", "Save file", and other options. Against "Open With" I can select from a dropdown "Other…" and I get the "Choose Helper Application" dialog. Now, "Vi Improved – A Text Editor" does appear in that list for me, but the problem is that choosing it opens up vim.exe in a shell window, while I want to see gVim.exe. In the "Choose Helper Application", I can select "Browse…" and navigate to Vim's directory, choose "gvim.exe", and then it works. But for the next file, it doesn't remember this setting, and I have to do it all again.

How can I make it stick there, or use another way to easily open files in gVim?

From reading Firefox bug reports, I figured that the "Choose Helper Application" dialog is populated based on the given file's MIME type, and, unless the user changed some settings, this is taken from the Windows Registry. But I want to be able to open any file with gVim, so it's not a good solution for me to set the default in Windows for every extension I possibly want to open.

First of all, Firefox bases the settings in "Choose Helper Application" on system settings, so there's no simple way to configure that.

An even better solution, usability-wise, is to use the Firefox extension called "Open With" https://addons.mozilla.org/en-US/firefox/addon/open-with/

It says it's for web browsers, but it turns out it could be any program — it just calls he program with the URL as the first argument.

Next, I wrote a Python script:

How to use this solution: 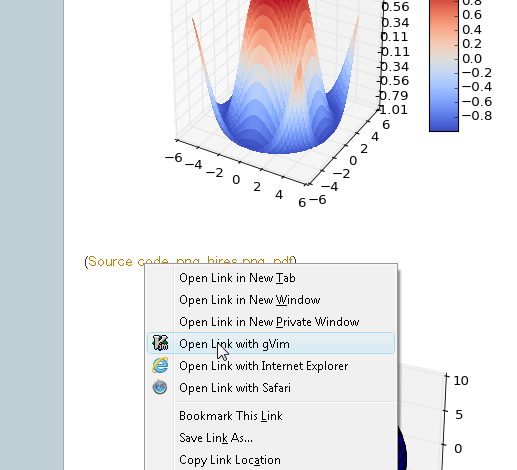 (Guess how I got the correct icon there :)

Bonus: if you set the relevant setting in the Open With extension's Options, you can right-click on a Firefox tab and open (most) web pages in Vim too — i.e. like "View Source" except using Vim.

Note that this solution applies just as well to Emacs, Notepad++, and many other software not restricted to text editors. For example, I just tried it with The GIMP, and it opened a PNG file. (To do that, replace gvim.exe above with the path to GIMP. Note: to open an arbitrary image this way, not just a link, you could View Image, and then right-click on its tab.)

Historical note: initially I went for writing a BAT script, but that became untenable after it failed on this test case: http://evgeni.org/w/api.php?format=xml&action=query&titles=AutoHotkey_shortcuts&prop=revisions&rvprop=content
That's because cmd.exe has problems with arguments containing the = character. Furthermore, it was not just a matter of calling gvim.exe with the URL as the command-line argument (though Vim does accept URLs), because it cannot handle this test case — just opens a blank instance of Vim. And for parsing the URL, I'd have to resort to Powershell, which restricts the portability of the solution somewhat. In the end I decided that having an installation of Python as a prerequisite isn't too much to ask.