Every here and there I hear about new LED monitors. I imagined that they were really LED monitors – that their screens were formed of multiple tiny LEDs that lit up in a controlled manner to form an image. Yet turns out they are LED backlit LCD monitors.

What's the difference between this and a trusty Belinea 10 17 51 I've been using for the five years already?

For a more in-depth explanation:

You got the concept wrong when you imagined it to be millions of LEDs flashing the different hues of colors to give you a display - all these kind of monitors are made of invariably 2 layers - a front layer of LCD (Liquid Crystal Display or Liquid Crystal Diode) that makes up the dots you see as pixels, along with the display of color. 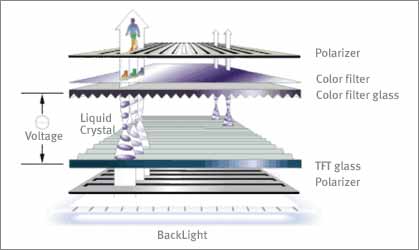 This LCD layer is then back-lighted using light tubes at the back, giving it brightness. Formerly, LCD displays use to use CCFL (Cold Cathode Flourescent Lamp) as a light source at the back, but however in recent years there has been a marked shift towards the use of LED (Light Emitting Diode) as a back-light source. The advantages of LEDs are as follows:

Well, these are the primary reasons why LED-based LCDs are considered to be better than CCFLs. They still come with a price premium though.