I need to mount a VMWare disk image in Windows 7 64-Bit however the "VMware Mount Utility" only works on 32-Bit operating systems. Is there an application or method that I can use to mount the disk?

Unfortunately, 64-bit Windows will restrict the ability to load 32-bit drivers, which is why the VMDK mounting utility is failing.

I found this page that purports to be able to work around the problem by simply installing it in the Program Files directory instead of Program Files (x86), but it did not work for me; perhaps you will have better luck. You could also look for a third-party tool like vdk.exe, but alas, they too need to use a driver, which gets blocked—yes, even when installing/running as administrator (the source for VDK is available, so someone may take up the task of updating and compiling it for 64-bits). OSFMount actually has a 64-bit version, but unfortunately it only supports read-only for VMWare disks.

There are a few threads on the VMW boards about this and it seems that the old DiskMount (5.5) just doesn't support 64-bit Windows and that a newer one is included as part of the developer tools (as though only devs would need such a utility). So your options are to use the vmware-mount utility from either the VMWare VDDK or the newer vSphere VDDK which contain a more recent copy of the mounting and disk management utilities. (Even these install as 32-bit by default and include a zip file with 64-bit versions of a few of the files including the disk management utility, but not the mounting utility.) You can mount a VMDK file with this, but note that it mounts as read-only by default; for write capability, you must use the /m:w switch, and even then, Windows keeps giving a path not found error when trying to change/delete files on the mounted volume.

VMWarePlayer has a built-in mounting ability via the hard-drive settings, but again, even setting it to not—read-only gives errors about being unable to find the file. (VMWare Workstation also does this, but VMWare Player is much smaller and free.)

Update: I just discovered that you can make changes to drive mounted with vmware-mount (from the VDDK), if you do it from an admin command-prompt (e.g., e: & del /f /q pagefile.sys). However, when doing it this way, it does not even appear in Windows Explorer. You can try experimenting with different combinations of permissions and user privileges to find one that works best. 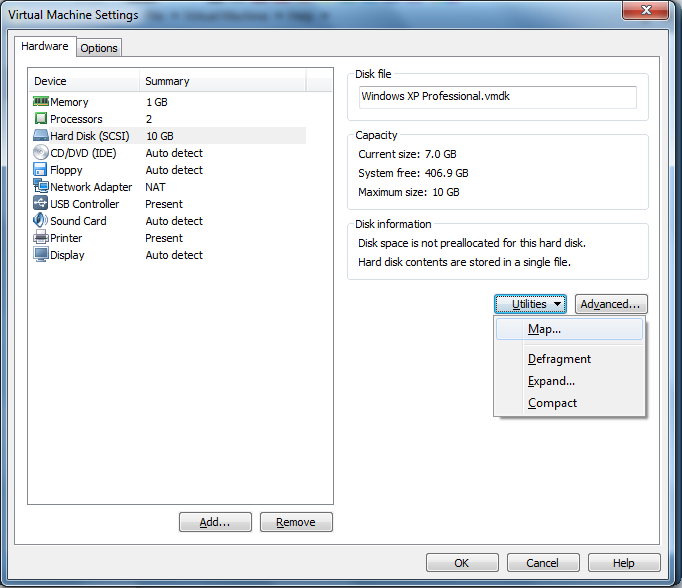 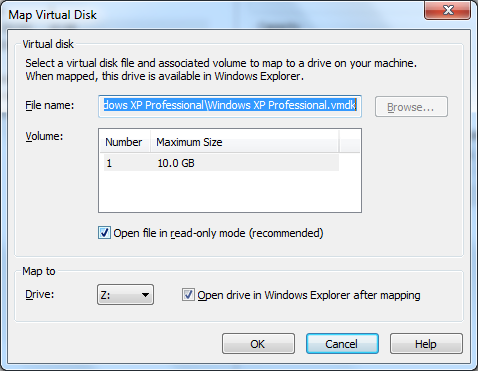