How do I go about installing a Modern UI/Metro app without using the native Windows Store app on Windows 8?

I don't know if it's even possible or if it is, how the app even gets installed from the Windows Store in such cases.

By default when Windows Store apps are built they are signed using a temporary key for local testing. This requires developers to obtain a developer license from Microsoft, which is free and available to everyone (provided you register). See the links section below if you are interested in getting one.

Now any PC that has a developer license installed is wide open, since by definition the license is to be used only by developers to build and test their apps. End users are not supposed to use this approach to willy-nilly install third-party apps, for obvious security reasons. Instead there is a "proper" sideloading method that Microsoft wants advanced/enterprise users to follow (for normal users, downloading and installing Microsoft-approved apps only from the Windows Store is the recommended safe approach). 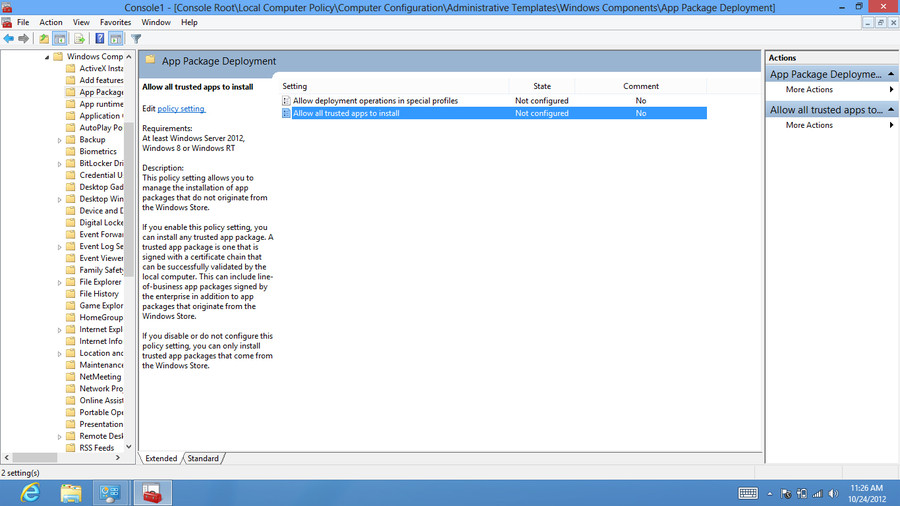 If the Local Group Policy Editor is not available (such as on Core or RT), you can set the value of the HKEY_LOCAL_MACHINE\Software\Policies\Microsoft\Windows\Appx\AllowAllTrustedApps registry key to 1.

Note: As per the name of the setting, only trusted apps can be sideloaded. What this means is that you have to have a certificate on the PC that matches the one used to sign the app (i.e. the app must be signed by a CA that is trusted on the target PC). Uncertified/untrusted apps cannot be installed using this method (and why would you want to?)

Of course, this is just the first step of what promises to be a long and arduous process! Now on Windows 8 Enterprise/Pro non domain-joined PCs, you need to activate an enterprise sideloading product key to enable sideloading of non-Store apps. More about this special key later.

Alternately only on Windows 8 Enterprise/Server 2012, you can enable sideloading just by joining the PC to an Active Directory domain that has the aforementioned Group Policy setting enabled. Windows RT cannot be domain-joined, so the only solution is to use an enterprise sideloading product key as mentioned above.

Once you've got this far, you can obtain the .appx package from the developer and install it (as well as any dependency app packages) by typing a command similar to the following at the PowerShell prompt:

The developer may also have provided an app-specific PowerShell script (such as the one created by Visual Studio as mentioned by User in his answer, but such a script might require a developer license which is not recommended for end users as discussed above).

To get a list of the sideloaded apps installed, open PowerShell with admin privileges and type the following command:

For further details including using the Deployment Image Servicing and Management (DISM) command-line tool or PowerShell cmdlets to add apps lacking Windows Store licenses to a windows image (WIM), see the How to Add and Remove Apps TechNet article linked to below.

That pretty much completes the overview of what the "proper" Microsoft-recommended sideloading approach is. Now let's talk a bit about enterprise sideloading product keys required by Windows RT and non domain-joined Windows 8 Enterprise/Pro PCs. These keys are available to select customers through Microsoft's Volume License Service Center (VLSC). See the Volume Licensing Guide for Windows 8 and Windows RT in the links section below for more details. These keys can also be legally bought online (search for the product code J7S-00004). The only downside? They are apparently only available in packs of 100 and retail for around $3000 per pack, so yeah, not exactly cheap.

A further wrinkle thanks to the convoluted process that is Microsoft Volume Licensing/Software Assurance (SA) is that if you buy PCs with retail versions of Windows 8 Pro pre-installed, since retail licenses are not SA licenses, either the sideloading product keys won't work, or they will work and the original licenses will be invalid. If you're scratching your head at this point (a precursor no doubt to a bout of vigorous hair-pulling out of sheer frustration), I recommend you read the It's complicated (isn't that an understatement!) ZDNet article linked to below, since we're getting into enterprise-level licensing and possibly legal issues that are best discussed elsewhere.