My brother wants to move to Linux, so he installed it on his second HDD. The second HDD was the boot sector drive, but Windows and all the data was on the first HDD. After installing, Linux would boot, but not Windows 8.1 .

So, I booted from the Windows Install disc, and ran startup Repair, which told me it failed, with no other explanation. I then tried other advanced options from a command prompt window, using diskpart as per How can I repair the Windows 8 EFI Bootloader? .

And, now, Linux will not boot, either, but I can easily re-install Linux

How may I recover the Windows Boot instructions?

I do not know if this is relevant, but here's the partitioning:

Hmm, this is a typical case if you don't know how these installers work. But don't feel bad. I have seen that many times because the causes are not obvious.

Let me first explain what has happened and then we'll see how to fix it.

Then you installed Linux on the port0 disk. The Linux bootmgr is the Grub which did overwrite your Windows bootmgr. If you are a Grub expert, you can fix that, but we will try to do that in another way.

Download the bootable CD iso of Partition Wizrd and burn that to CD. Boot your PC with that CD and mark the C partition of Windows active. See the steps in the picture below.

Now run a startup/repair 3 times. Then try to boot Windows.

Next time you install Linux on the port0 disk, unplug the disk where Windows is. Or even better and a lot more flexible - install Linux in a virtual partition. That is completely trouble free and will not present any such problems as you have seen. Here is how. In this tutorial I also use Mint. 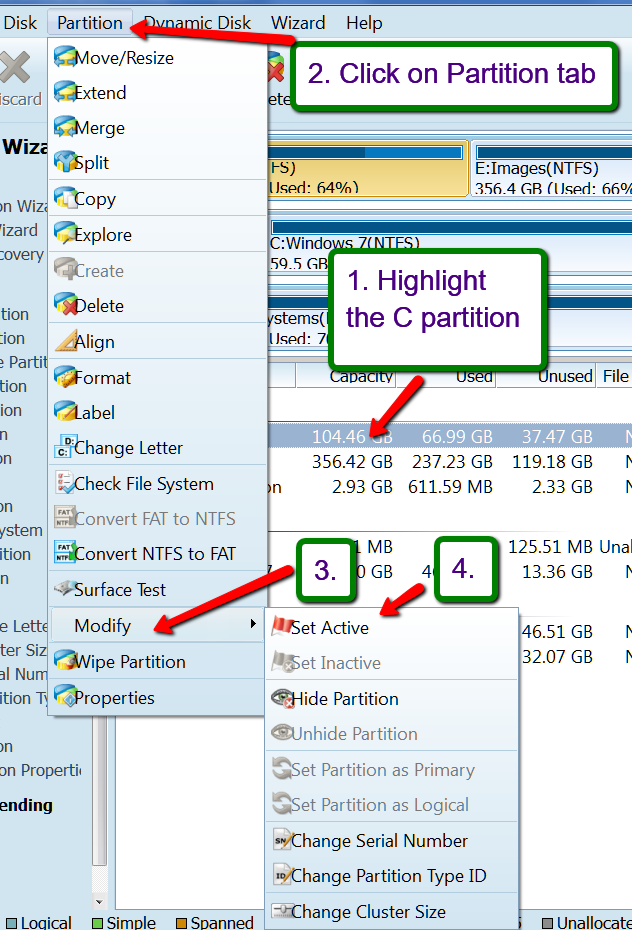