I have a Nvidia GeForce GTX 660 graphics card and a dual monitor setup. Sometimes my screens go black and get a warning like:

I tried a lot of things; specifically, I updated my OS, GPU driver, second GPU driver, motherboard BIOS and utilies. But I am still getting error sometimes, about once every two days. I downloaded a program called "EVGA PrecisionX 16" and use it with these settings: 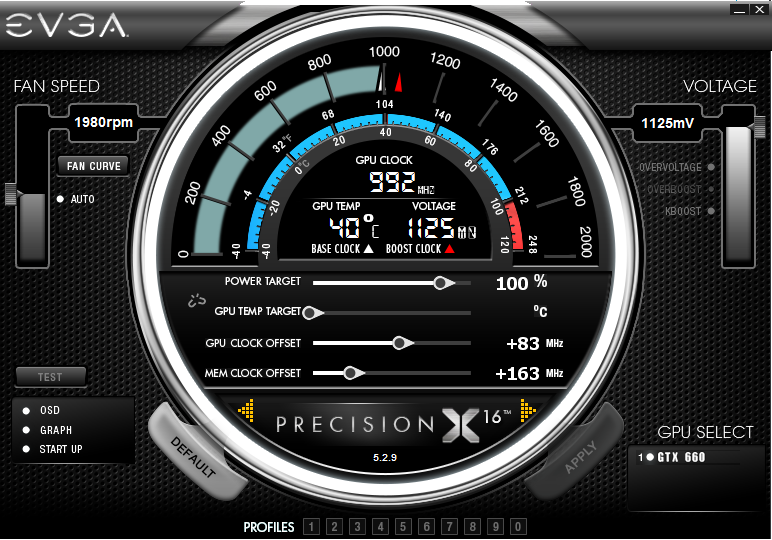 As already mentioned I use two monitors which are identical, I mean they both have 1920×1080 resolution and are same model. I connect one of them first to my Nvidia GPU HDMI port and second one to Nvidia GPU DVI port. I usually use both of them, but while gaming I disable secondary (with help of a program called UltraMon) and use my primary monitor to play.

And while I am gaming I monitor values from this program and I observed max. 65°C in GPU temperature. I monitor my CPU temperature and fan speed and they appear to be normal. Am I wrong about my GPU voltage?

My hardware and software details:

If you want more information about my system I can edit post.

EDIT : I uninstalled whole W7 and installed W8.1 64-Bit. There is no driver kernel error but sometimes, espeacially while playing game with background music with Windows Media Player , I got some audio freezing. Except this, there is no problem. It may be not a hardware problem.

UPDATE : Today(Feb 4th) I got this error again in Windows 8.1

UPDATE : (March 2015) I upgrade my 8 GBs RAM to 16 GB and have never got that error. I think this is the real milestone for this problem.

It looks like you are not using the Intel HD Graphics - if that is the case then you should disable it in the BIOS. Section 2-5 of the manual indicates where to do that.

This will have small additional benefit of using a little bit less power (a few watts).

Note for other readers: you will need to consult the manual for your specific motherboard to find where to disable the on-chip graphics in the BIOS (or UEFI).