This question is somewhat related to
Is it better to choose a more-crowded WiFi channel or one with a strong competitor? and 2.4GHz WiFi channel selection when all the non-overlapping channels are crowded but these do omit certain aspects which I believe to be relevant for my scenario. Although I describe my setup specifically, I'm mostly interested in the general question of "few strong competitors on the same channel or many weak ones".

I am trying to optimize a medium-sized WiFi installation consisting of 18 AccessPoints. The following restrictions/parameters apply:

The APs are mounted in hallways. As a result, APs receive each others signals quite strongly and from many different APs. The stations are mostly located in rooms along the hallways and receive only the closest 1-3 APs due to wall thickness.

As with the questions above, I am curious about the most ideal channel selection for all the APs. Using an optimization algorithm with different heuristics, I was able to determine multiple setups.

Setup 1:
Isolated "Islands" where APs have the same channel. If an AP uses the same channel as one of its neighbors, but it is ensured that the neighbor is actually close (with high received signal strength). There are no neighbors on the same channel with very low received signal strength. The overall number of conflicting channels is quite low, but IF there is a conflict, it is a stong one. I feel like this might not be too bad, since stations on a conflicting channel are easier to "see" for APs (less hidden terminal problems) and the overall number of conflicting stations may be lower. 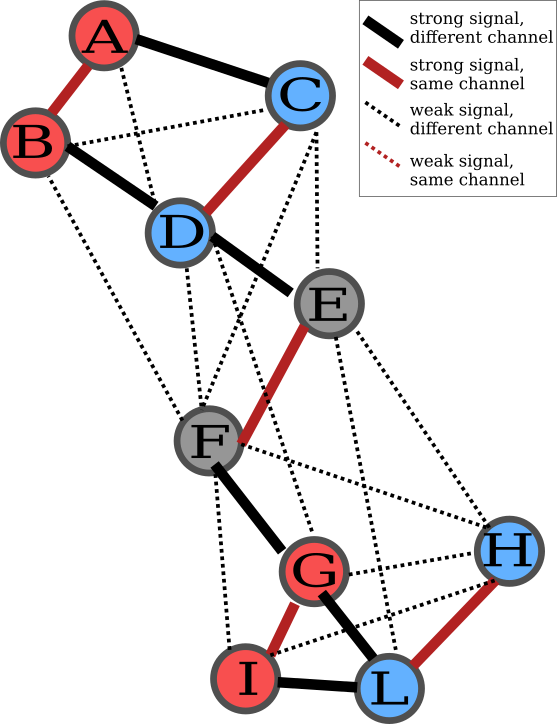 Setup 2:
Keep APs on the same channel as far away as possible. There are more conflicts in total (and per AP), but the conflicts have lower signal strength. Strong received signals are never on the same channel. This setup is more in line with the general suggestion of "choose the channel where competing signals are not too strong" which I read in some forums. However, I feel like this setup will encounter problems with hidden/exposed terminals and a lot of airtime is wasted due to RTS/CTS messages. 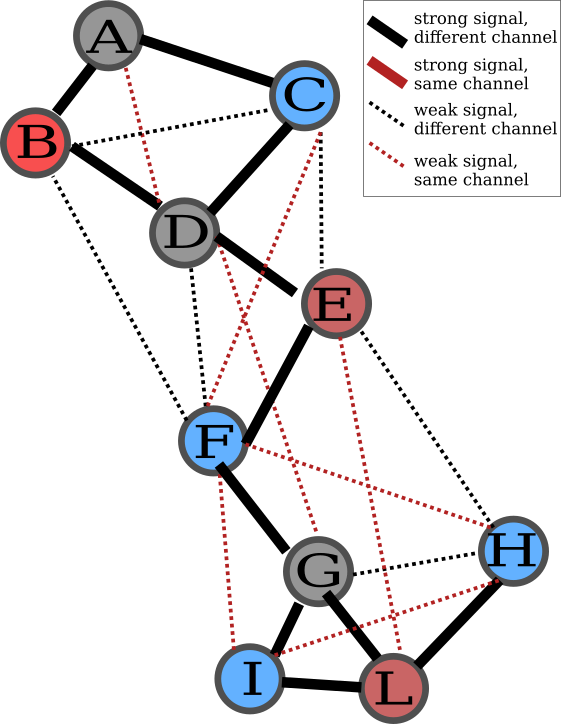 I am aware that a definitive answer would require more information, but this is not only about my setup but about understanding how WiFi works in such a scenario (assuming no external interference, which actually applies in my case).

So, do you have suggestions as to which of the setups is preferrable? Are my assumptions about the setups reasonable?

I just realized that I made some simplifications in my previous TL;DR that slightly skewed the intent of the question, sorry for that.

So the revised TL;DR is more of a new way to phrase the question but uses the example given above: For a given access point, should I optimize for a low number of APs causing co-channel interference xOR should I optimize for reduced RSSI of neighboring APs? As this is a tradeoff, solution 2 would actually increase the number of neighboring APs that interfere on the same channel.

This means that if you set a wireless router or access point (AP) to channel 6, it actually uses channels 4-8.

If an AP on channel 6 is transmitting, all nearby access points and clients on channels 4-8 will defer transmissions. The result is that throughput is adversely affected: Nearby APs and clients have to wait much longer to transmit because they have to take their turn. The unnecessary medium contention overhead that occurs because all the APs are on the same channel is called co-channel interference (CCI).

When designing a wireless LAN (WLAN), overlapping cell coverage is necessary to provide for seamless roaming. However, the overlapping coverage cells should not have overlapping frequency space.

Conclusion: Setup 2 is the correct setup, using only channels one, six and eleven.