I'm pushing a generic, Win10 Enterprise v1709 WIM via SCCM OSD, except for one problem.

When a user logs in, they get all the consumer apps on the start menu (which I don't want).

to the customization script that runs in one step of the Task Sequence (and sets a number of other things), then they don't get the apps, but they do get a bunch of "broken" tiles. The Start Menu looks like this: 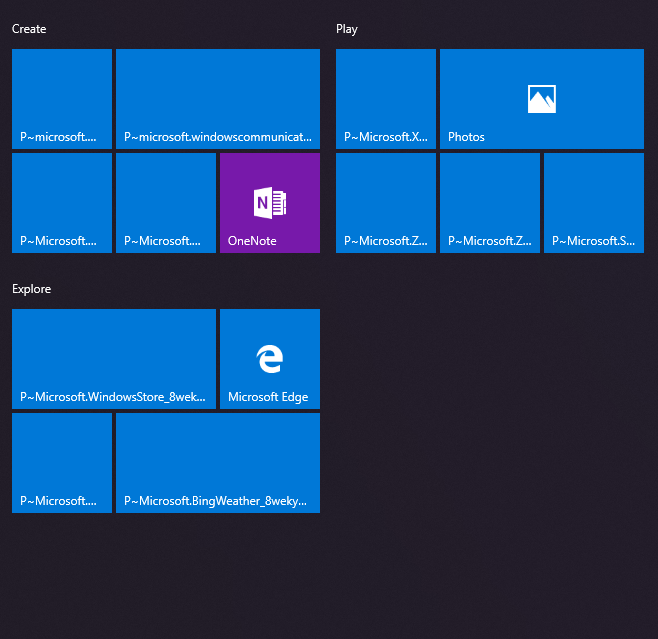 Everything I have read says that registry key should work and the Start Menu should be mostly empty space with Edge and maybe one or two other default tiles. What am I doing wrong?

TLDR: The "erroneous", "defaultuser0" account/profile is necessary - don't delete it!

I figured out the problem and thought somebody might find it helpful in the future... the "defaultuser0" account is needed!

On other systems (and a different imaging process entirely -- Ghost), I have noticed a defaultuser0 account (in the Admin group!) and profile when I was logged in and installing custom software. As is described in many other places, this account is some kind of bug/error and it should be (and has been) safely delete-able. I've never seen any issues with deleting it.

Apparently, in some situations, deleting it does cause a problem.

Because that defaultuser0 account is apparently reasonably prevalent, one of the last steps in my process ("Task Sequence") that installs a default Windows 10 1709 Enterprise and some software and configures default settings was to delete the "defaultuser0" account and profile if they exist. As soon as I commented out the lines:

of the completion script that runs just before the final reboot, all the Start menu items went away and I got a start menu with only the Edge, OneNote and Photos tiles as I had expected all along. In addition to fixing the Start Menu, a few other unusual behaviors (e.g. first user to log in must do so twice) that I was going to track down later went away.

Hope this helps someone.