I have two hard disks which I would like to use. When I bought the second one I didn't realize that my power supply only had one hard disk cable.

Is there any way I can still use my second one, like a connector or something? If not, I have a newer one (900W) that I haven't used, but a friend said that it's too powerful for the use of my computer and might cause some damage.

Motherboards can't be damaged by having a "too strong" power supply, the PSU only delivers the energy that your components draw.

A 900W rating means that's the maximum that this particular PSU can deliver, but if your components have a combined draw of 300W, that's all they get.

For using one power cable for two disks, you may use what's called Internal Power Supply Cable Splitter or Power Supply Y Cable from your local electronics shop. However, ensure that your PSU is up to the task. 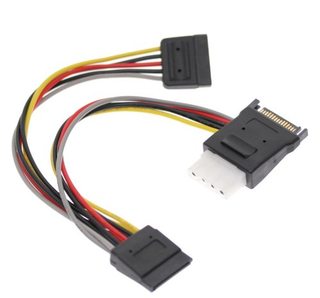