If you look for "UEFI Definition" on google you find :

Unified Extensible Firmware Interface (UEFI) is a specification for a software program that connects a computer's firmware to its operating system (OS). UEFI is expected to eventually replace BIOS.

So should I conclude that all those definitions of UEFI and other pictures like the following (stated from the wiki page) are total non sense totally non accurate ? 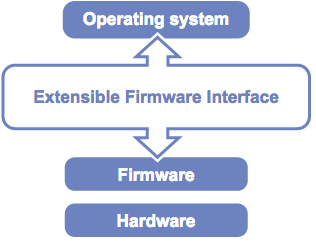 (…in this picture, if firmware means BIOS, then what was UEFI supposed to replace again ?)

Different people use terminology in this area in different ways, so there's not 100% agreement, and that can lead to confusion. That said....

Thus, the way I use these terms, BIOS and EFI are two different types of firmware. (There are others, too, like OpenFirmware (wiki).) Some people, though, use BIOS and firmware as being more-or-less synonymous, especially when referring to firmware on a motherboard. In this system, an EFI is a type of BIOS. I dislike this second approach because people tend to drag in assumptions based on the first thirty years of PC history -- that the boot loader resides in a hard disk's MBR, for instance -- that do not apply to EFI-based computers. Unfortunately, many PC manufacturers use BIOS and firmware as synonymous.

You may also want to check out this question and my answer to it, which is related but not identical to your question.