As the question states: I used the internet on a shared machine and deleted history (Internet Explorer), which deletes all of the following: 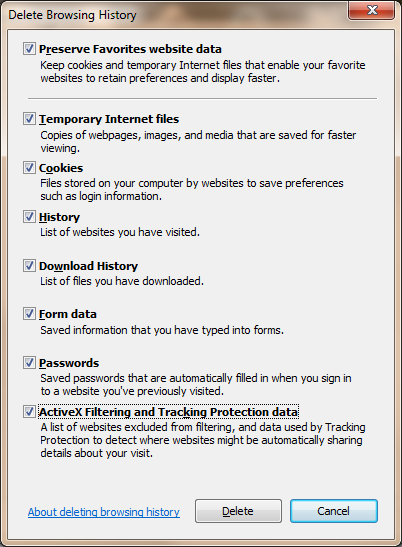 As to the "anyone" I'm talking about, I mean I used a university computer, that are not suspicious but just in case they decided to take the computer and check to see if I used the internet, I want to make sure they can't find anything out. How can I cover my tracks to minimize the chances that they find out I used the internet on the machine? And by use, I mean even cover up the tracks that I opened the Internet Explorer application.

Any good managed network logs all internet traffic across their router. This would include the source and destination (one of those is the computer you were using), and the date and time (which would allow them to correlate to the time when you were on the computer.

On the computer itself, if someone really really wanted to know what you used, the timestamps on the program include Last Accessed, which would be when it was last opened. Especially on modern systems there are so many things going on in the background connected to other things in the system that looking at system logs and application logs a sufficiently capable technologist should be able to put together a reasonably accurate picture of what you were doing and when you were doing it.

Most University computers also require you to login with your username and password. This information then authenticates the session against the servers and other systems on the network, which also record certain sorts of information regarding what you do during your session.

Finally, even if you were to use a Virtual Machine, as dsandre suggest, there would still be records of where that virtual machine was running (on the computer you're using) and therefore it is only slightly better security.

So the real issue is: What are you doing that you are so anxious to know how to hide?

Anything overtly illegal and forbidden and all these various systems will be used to put together a case against you regardless of what you do.

If you were only being annoying or breaking minor school policy, they may not go to the full effort of checking everything.

That said, any sort of behavior like this, in most schools, is grounds for being expelled. So balance whatever you want to do against how much you fear having to tell your parents you were kicked out of school.

There are only two ways to hide stuff complete:
1. Don't do it.
2. Use your own internet connection.