About a week ago my Logitech G502 Proteus's scroll wheel intermittently stopped scrolling correctly. It appears to happen in a pattern; so if I scroll up 50 times in a row, it will ignore the 10th, 20th, etc scrolls while recognizing the rest of them.

I couldn't find much about it on Google. I found a few threads complaining about the G502's scroll wheel in general but the only suggestions were to RMA it, replace the scroll wheel entirely, or switch to a different model. A few people appeared to have my exact issue but nobody seems to have the fix for it.

What can I do to fix this?

The solution turned out to be very simple. As I learned from this Superuser post, Logitech's scroll wheels use a diode and receptor to recognize when the little spokes inside the wheel are turn. Unfortunately, if dust manages to lodge itself inside the spokes, it blocks the signal, preventing the action from being recognized for that particular turn.

After following this guide (volume warning), I opened up my mouse, noticed that the spokes had a few small pieces of dust caught inside them, and sprayed them with compressed air ($2-3 at Walmart) until the dust was cleared. That fixed the problem.

I didn't take a photo of the dust but this is roughly what it looked like: 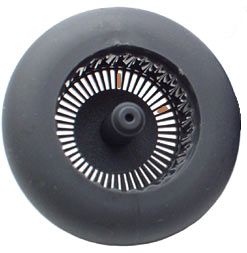