Hi i have this problem for quite some time and I'm unable to solve it.
First i noticed this, when windows start showing me error messages "Your computer is low on memory" when usually with the same apps running there were no problems. The longer uptime the worse it gets, so i began to suspect some leak is happening.

This is situation when the system uptime is 9 days (I'm hibernating twice a day, it's hibernated when i sleep and when i'm in work) and everything memory consuming is closed. 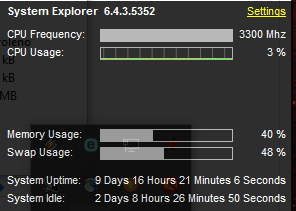 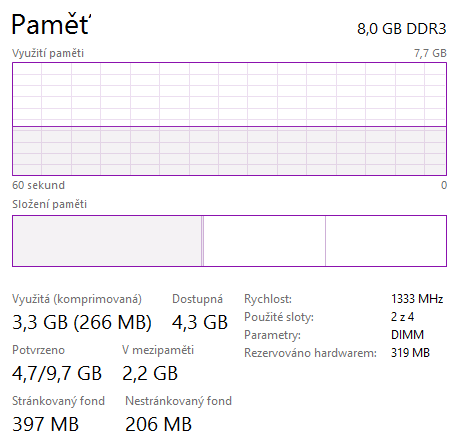 this means used memory is more then 3GB but sum in task manager – process tab is no more then 700 MB.

(show something with tag fdmg that (if I understand that well) didn't free 2GB of memory.)

and now, I'm lost, what to do now? My system have some issue, but i don't know where the paged and nonpaged looks ok in task manager, but still, something is eating my memory and not giving it back. What to do? Only reboot helps, but sometimes the memory leaks faster and rebooting every other day is really not solution, and I'd like to avoid reinstalling.

EDIT:
It's been some time and it seems to be fine, i had 20 days of uptime (reboot for updates two days ago). I'm not sure wheter I solved the problem or just eliminate it just enough to stop the "low memory" messages. What I did was updating bios to the newest possible (2014 is latest), also some bios tweaks by setting the iGPU memory by hand, although I think It didn't change anything. What I think was the one, switching from Chrome to Vivaldi. Memory is now much more stable, and It's returned when browser is closed. I don't blame the Chrome solely, probably interplay of "unsupported" cpu under win10, hibernating, and that stupid chrome 🙂

poolmon is now ok, the most eating tag is 160MB and then some in lower tens of MB with Vivaldi running about 80 tabs.

EDIT for duplicity
My problem is probably unique by not finding some specific driver causing the leak, instead it looks like Chrome has problem with something. This is still not solved, just symptoms was eliminated for now.

The high memory usage could be caused by the Intel HD driver. The driver generates modified memory and the system compression compresses it to avoid pagefile usage.

This memory usage leak can be caused if the Intel HD chip has too much memory allocated in BIOS/UEFI. Reduce this number, according to the trace it uses 2300MB. So much memory is not needed for Full HD screen resolution. Set the GPU memory to 256-512MB, this should be enough.

The rest of the memory usage is a sum of your running applications. Reduce the number of running tools at startup if you think your 8GB mmemory is used too much.