I have two sata hard drives configured as RAID1 that I am using as a data drive in my Win7 system. The OS is installed on a non-raid SSD drive.

After installing the OS and starting Win7 for the first time, the raid drive was not shown in My Computer. In Drive Management, the drive was listed like it should be, just without a drive mapping. I added one and the drive became listed and accessible in My Computer.

Since the drive was given a mapping after everything else was done auto, the drive now had a mapping later in the alphabet, so I rearranged the mappings so that this raid drive for data was listed right after my OS drive.

Now, whenever I restart, the drive loses its mapping. It is always listed in Disk Management, and I can always manually add a drive letter to it. However, with each reboot, this needs to be redone. I'd like to point my library folders (Pictures, Docs, Downloads, etc) to this drive instead of it being on C:\, so losing the mapping on every restart would be quite painful there.

In researching this, I was led to looking at mountvol and editing the registery. While this makes me nervous, the values don't quite seem to fit. 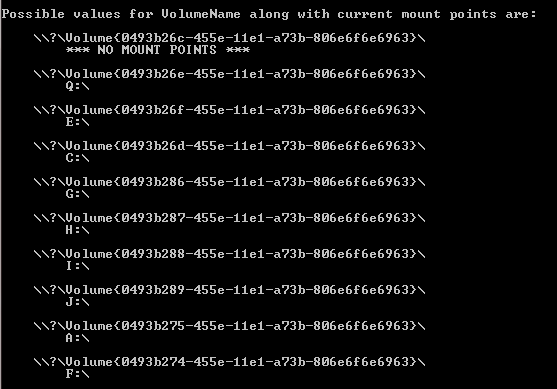 The first volume listed with no mount points I presume is my missing D:\ data drive. Note that this drive is currently mapped and showing in My Computer when I ran mountvol to get the output.

I've seen it suggested that \HKEY_LOCAL_MACHINE\SYSTEM\MountedDevices can be edited to include the appropriate mountvol, but things don't seem to match up.

So, there's a lot of extra stuff here, the first item listed being the volume without a mount point from the first image. There's also a K:\ drive which doesn't appear in the cmd output. Mapping my data drive to K:\ and restarting doesn't result in the drive being auto-mapped.

I'd rather not just start dumping random values into the registry, so I'm hoping for more authoritative guidance then "hey, let's try this random thing!" (:

I have two possible solutions. Hopefully one will work:

This user has nearly the same problem you do, except it's with a single drive as opposed to your RAID array. This user was able to solve the problem by zeroing the entire volume, and then Windows was able to hold the assigned drive letter.