I have a Motorola / Sol Republic Tracks Air bluetooth headset. It works fine with both of my phones, and now I'm trying to use it to listen to the audio on my Windows 7 laptop. I have a cheap, unbranded bluetooth receiver bought off Deal Extreme. I know it works, because my girlfriend uses it to send pictures from her phone to her computer.

I coonected the bluetooth receiver on my lapptop and after automatically downloading the drivers off Windows Update, it is detected as "Generic Bluetooth Radio – Cambridge Silicon Radio Ltd." (see image below):

Then I proceed to pair the headset to the computer: as soon as I turn on the headset it enters pairing mode, announced by a series of beeps. If it was my phone I'd just turn on the bluetooth feature, wait for the scan to find the headset, press on its icon and the pairing would be finished. On Windows 7, I right-click on the bluetooth icon on the system tray, select "add a device", click the device name and press "next". It then presents me a dialog asking if I want to set a pairing code to type on the device keyboard, or type on the computer the device pairing code ("look for it on the user manual"), or pair without a code (see images below):

The device (obviously) has no keyboard, and although I have RTFM there is no mention of a pairing code on the user manual, so I choose the latter option. Then almost simultaneously three things happen: (1) a notification that the device has been added to the computer, (2) a driver install dialog showing Windows retrieving the drivers from Windows Update — the three items installed are "Tracks Air (Mono Audio)", "Tracks Air (Stereo Audio)" and "Tracks Air (Remote Control)" — and (3) a bubble notification stating "a bluetooth device is trying to connect". 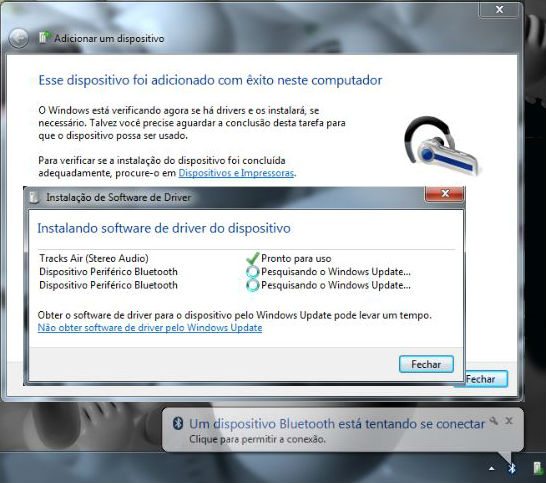 If I click on the bubble notification, I am shown a dialog window asking for the pairing code (see image below). The problem here is, as far as I know of, there's no pairing code! 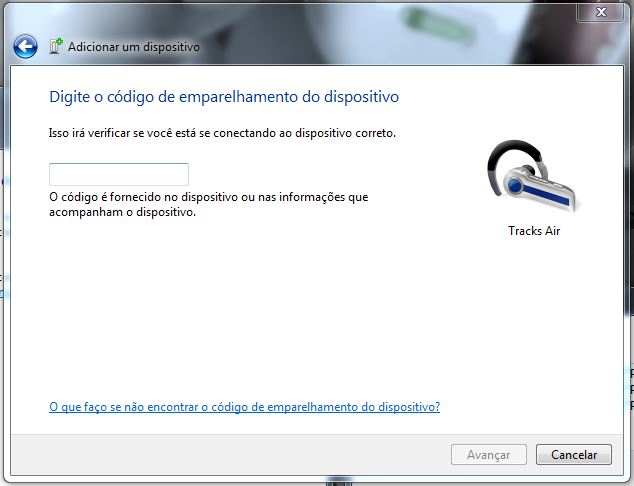 The headset seems to be recognized by Windows: it shows on the "printers and devices list" on control panel. Below are the "hardware" and "bluetooth" tabs of the device properties. On this last tab it says "device currently connected" even if I turn the headset off. There's also a "services" tab indicating "audio collector", "remote control" and "hands free telephony" (and with "headset" unchecked. I if check it and click "apply", it shows a driver installation dialog, and fails for "Tracks Air (Mono Audio)", but I suppose it is not relevant because I want audio output on the headset only).

Meanwhile, the headset keeps beeping to indicate it's still on pairing mode, and the "a bluetooth device is trying to connect" bubble keeps appearing periodically on the system tray.

The playback devices tab shows the headset as a possible audio output (see image below), but the option to use it as default is greyed out. There is a "connect" option, but upon clicking it, the system tray bubble shows up again. 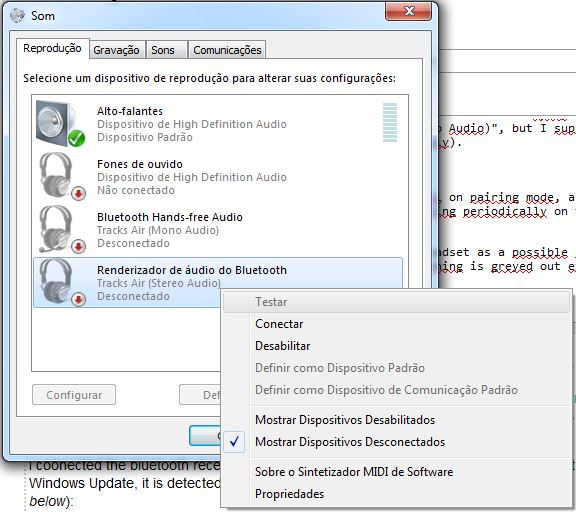 I tried pairing the device on Ubuntu 12.04. Upon clicking on "Add a new device" it shows the following screen; the "PIN Options" button shows a dialog box that allow me to either select some sort of PIN auto configuration or insert a PIN manually.

The same dialog box states that many devices have their default PINs set as 1111, 1234 or 0000; the latter more common for devices such as microphones, mice and GPS.

I have entered 0000 on my device and it paired.