Sometimes (not always) when I raise my computer from standby (not hybrid mode), I get BSOD (after a bit, around 30 seconds). This problem exists since when I bought it, around 1 year ago.

I would like to know if there is some solution. I think that the problem is SSD related, but maybe I'm wrong because I've 2-3 issues.

My configuration is this:

I'm using the SSD as a RAM backup if I exceed my 6GB (only 2GB as suggested on OCZ website); but I think I never reached that limit (I have a G19 and I track my memory consumption on it's screen, and I really never filled up my physical memory) so maybe that's not the problem. Could it be just an incompatibility issue related to the fact that is on PCI-Express? Maybe Windows have some problems with it even with drivers.

The second thing that this may be created from is my graphic card, infact I got a lot of times the message "285.xx" driver has stopped working and has been restarted. While this doesn't happen while I play under heavy load (battlefield 3/skyrim/other heavy games), it happens sometimes when simply using Windows, roaming around my desktop. Also recently Windows stopped to recognize my main screen, to fix it just needed to press Detect under resolution settings, but it's worth a notice.

The third and last thing that this problem may be created from is my power supplier:

When I shutdown my computer if it has been under heavy load it makes a silent noise like whistle which can't be heared if there are other noise, but when you are going to sleep, you can definitely hear it and it's quite boring. The only solution I've found to this is detach my computer from electric supply (by pressing the button 0/1 behind my power supplier).

That being said, I would like to solve my BSOD problem by understand which is the problem, doesn't matter changing my hardware because I still have warranty, but is boring having a good computer with problems. 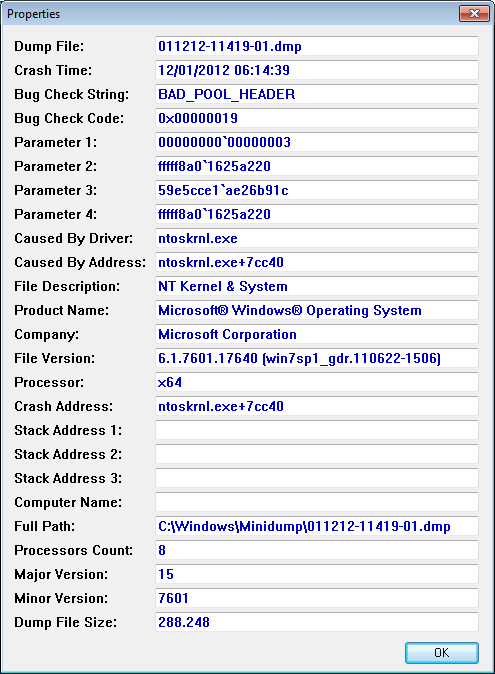 Edit 2:
I should also point out that the thing about graphic drivers that stopped working is happen more frequently this period, maybe something is "getting worser".

Edit 3:
I updated all drivers/bios of the motherboard and so on. It looks like the problem is persisting.

Edit 4:
Seems like the graphic card problem is not connected with this one, I fixed with this topic on nvidia forums

Edit 5:
It's long time that the problem doesn't show up, I'm not sure it is fixed for some reason (maybe connected with graphic driver and power management?) I'll let you know. Thanks for all help

BAD_POOL_HEADER BSOD almost always indicates a faulty software (e.g. a device driver bug), rather than a faulty hardware. What it says is that an essential internal Windows data structure has been corrupted, and Windows cannot continue. If the BSOD is inconsistent (e.g. you're getting a different code each time), then the code itself is not indicative, obviously.

One needs to use programming tools (kernel debugger, etc.) to analyze the problem and fee which driver is at fault, and this is time-consuming and the success is not guaranteed.

One other thing you can do is to test your memory with memtest86, since faulty memory might be the cause of this kind of BSOD (rare).

My conclusion: Most probably not SSD-related in any way, try updating your drivers (motherboard, graphic card, etc.) and see if it helps.