I have 1 license of Acronis True Image 2011 for 1 PC. I had it previously installed on my Windows Vista machine and it was working. Now, I wanted to move it to a Windows XP machine, by uninstalling it from Vista and installing it on XP.

Note: Unlike the latest version, True Image 2014, True Image 2011 does not require any "transfer" of license information, i.e. when moving the software from one machine to another, you don't have to "de-activate" it on the first machine and then "activate" it on the new machine. It should be sufficient to just uninstall it from one machine and install it on another. See KB43955.

I currently only have a license for the True Image 2011. I successfully uninstalled it from Vista, but installation on XP fails. At the time of this writing, the latest build of True Image 2011 was build 6942, which is what I am using. When I start the setup program (ATIH2011_6942_en-US.exe) I get to the main installation window. That's where I get stuck. 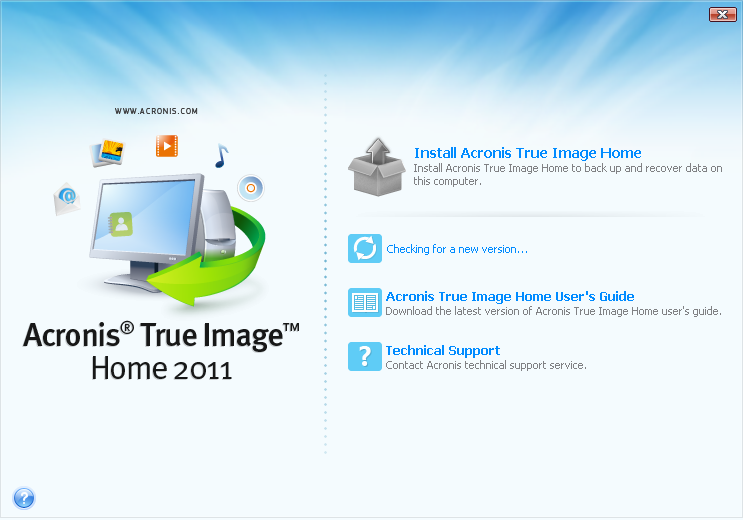 In the screenshot above, note the message where it says:

Checking for a new version…

Also note that the option "Install Acronis True Image Home" is greyed out.

For this reason, and for this reason alone, I cannot install True Image 2011 on XP. This really makes me angry. I have no doubt that once the installation process is started, the installation would succeed. But the problem is that the setup program wants to check for a new version of the software, and it does not allow me to proceed with installing the current version, not until the check for new version has completed. But that's just it! The check never completes! The two "sync" type of arrow animation just keeps spinning and it says "checking for a new version".

Honestly, I never did like this aspect of the True Image 2011 setup program. As it shows now, I was right to be skeptical about this design. Just because of this stupid thing I am unable to install the software that's already there in the installation file. Instead, it gets to be smart and go check for a newer version. What kind of moron designs a software like that?… True Image 2011 has been succeeded by both 2012, 2013 and now the latest 2014 versions. There will most likely never be a new release, build 6942 was probably the last build.

Is there no way to stop the version check? Any way to interrupt it or skip it? I was reading the Acronis KB database but found no information about any switches. Does anyone know if it's possible to use command line switches with the Acronis True Image series of products?

A simple line like this would be extremely helpful in my situation:

I made this up now, of course, just to show what I mean. I am using "nc" as a short for "no check". But I can't really stress enough how important this is. Unfortunately it appears as only the SMB (small-medium-business) products from Acronis have support for switches and command line.

So I'm screwed then I guess?…

I actually wanted to move the True Image 2011 to the XP machine just so that I can make a disk image backup of the system disk with it. This was the only reason. I then wanted to format the disk, reinstall XP on it, buy the 3 PC license for True Image 2014 and install and activate one instance of it on the XP machine. I would then use the disk image I created earlier. That was the plan.

I then learned that the free trial version of True Image 2014 has no feature limitations. The only limitation has to do with disk cloning. So I downloaded the True Image 2014 install file (ATIH2014_5560_en-US.exe). That would be the build 5560.

I try to run the setup program for True Image 2011 on XP by double-clicking on the EXE file. There is no response when I do this. When I open Task Manager I see the status "Not Responding". So I click on End Task and close it. Explorer restarts.

I then tried executing it from a CMD window and I got lucky.

As you can tell by the screenshot above, when the EXE file is executed from a CMD window it starts "unpacking installer files". I thought that would be the end of it, but I then ran into new problems.

After the installer files were unpacked, I got a message saying that Windows Installer version was not compatible.

Windows Installer 3.1 or later must be installed first.

So I checked my Windows Installer version. 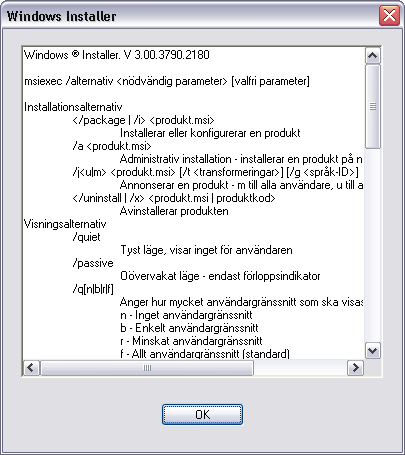 Since I had an old version of Windows Installer I decided to head over to Microsoft website and download the latest version available for Windows XP. That would be "Windows Installer 4.5 Redistributable" (WindowsXP-KB942288-v3-x86.exe).

I started installing this and ran into new problems. Grr! 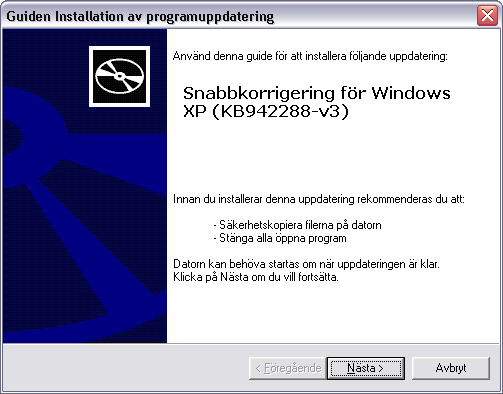 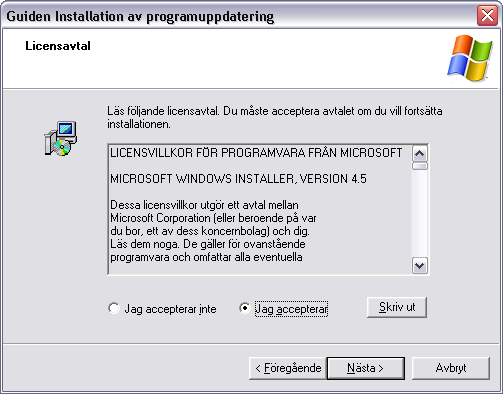 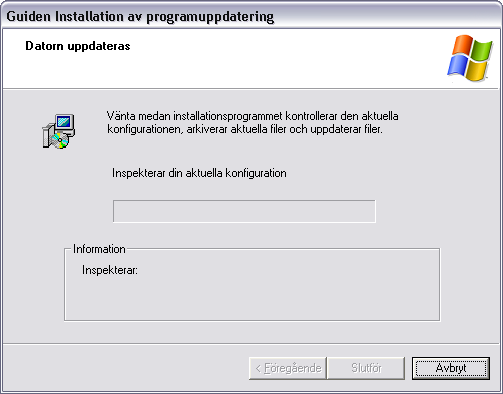 It talks about verifying integrity of file Update.inf and that I must make sure that Cryptographic Service is running. So I checked.

It was not running! 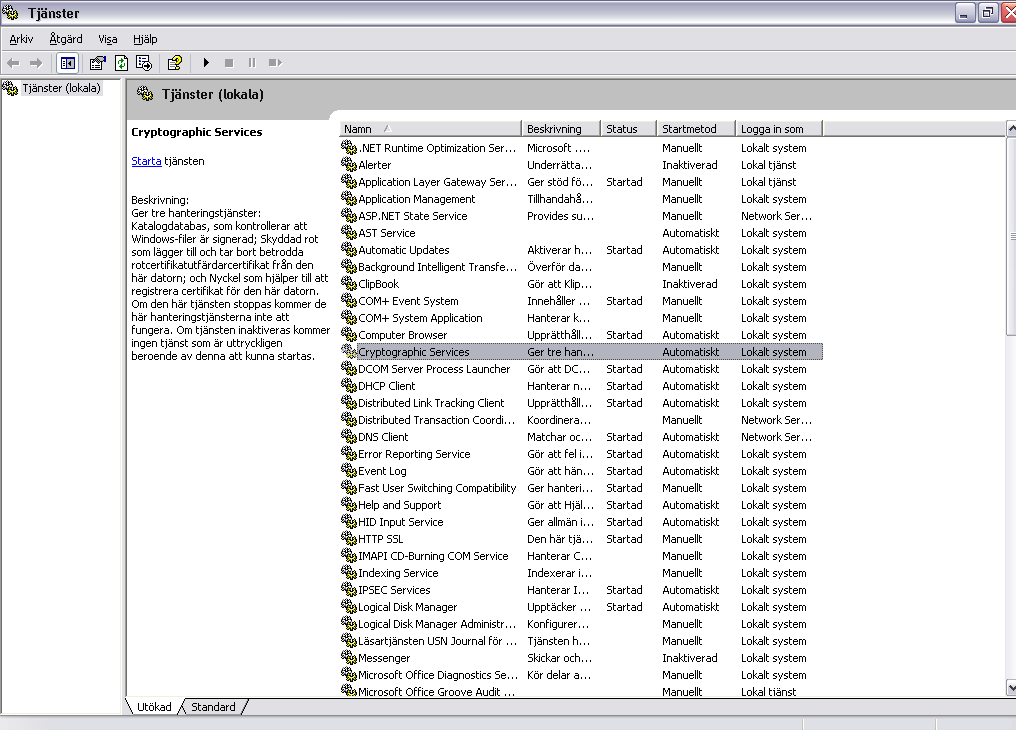 I clicked on Start link to start the service. Now I got a new error message! GHHAH!!

In short, it says the service can't start on local machine, can't find the module. Now what the hell is that supposed to mean? Where do I go from here?…

I feel like installing True Image 2014, or even 2011 will, or any version in-between will take some time… hopefully I will be done with it by the end of the month!! Unbelievable!

I see no mention of 32bit or 64bit. This leads me to wonder if this may actually be your problem. In the end, the best solution is to ask Acronis. You paid for it so just ask. Worst thing they can do is refuse to help you.