I have two laptops:

When I try to connect to the Internet via Firefox or IE on the XP laptop the browsers fail to connect. When I open the Wireless Network Connection Status window it says:

It basically looks like this image below, with the little lock icon except the two screens are blue and sometimes gray in my version: 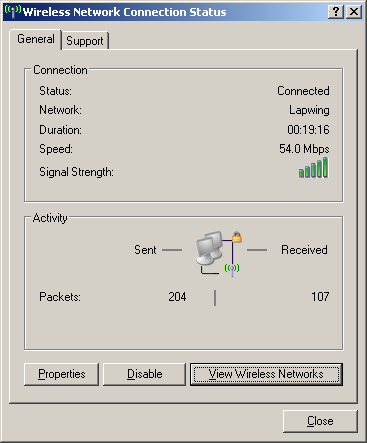 In my Network Connections > LAN or High-Speed Internet window I see:

When I open up Command Prompt and enter ipconfig I get three main sections under Windows IP Configuration:

Now I try pinging because I realize this is one way to find out if there is a problem. My ping tests follow:

Now on to Windows Firewall. When I try turning it off and going to a webpage on Firefox or IE I still can not connect to the Internet/webpage. Also, Firefox is checked in the list of exceptions in the Windows Firewall window.

I should mention that the other day an iTunes/Apple Software Update window popped up randomly. I assume that somehow it was connecting to the Internet and got a message from Apple to update the software. Also, in my Notification Bar I see the yellow shield icon. Clicking it brings up the Windows XP Automatic Updates window and it says I have 5 updates ready to install. When I click install on both the Apple and Windows update windows I get failure to install messages. So perhaps it is connecting via one port but when it attempts to download it is being blocked by the firewall? Not sure.

What should my next step be in getting connected to the Internet?

I would then reset my TCP/IP with this command: netsh int ip reset then reboot.

As in the comments, I would not rule out a virus either. Scan with Malwarebytes, Superantispyware, and Hitman Pro.