My network at home used to be a laptop and desktop connected wirelessly to a single Wireless ADSL router, a Cisco 877W.

Wireless reception around the house with this setup was quite unreliable, so I've gone about looking to improve it.

Additionally I can hook a Netgear DG834G Wireless ADSL router into it with the adsl not plugged in, and after turning off DHCP can RJ45 a computer up to the network.

I wondered whether this could be a problem with the Netgear so I've borrowed a Cisco Aironet 1200 and got this working fine when it's attached directly to the primary ADSL router. I can connect to it wireless and get onto the internet.

However, if I then plug it into the Netgear I can communicate with other devices attached to the Netgear, but can't get any further than the Netgear.

All the while though the other devices RJ45'd to the Netgear are communicating with the internet just fine.

I'm starting to suspect it's one of two things causing the problem:

1) For some reason the belkin powerline adapters don't like carrying wireless-originating signals. Could this be possible?

2) The primary Cisco ADSL router doesn't want to communicate with other devices on my network more than one hop away from it. I'm making an assumption here that within the Netgear box the wireless and wired sides are handled differently. Could this be true?

Has anyone successfully setup something similar to what I'm trying, with a wireless device on the otherside of a pair of powerline connectors?

Thanks for the answer John – and for clearing up some of my questions. The model number of the belkin powerline adapters are F5D4076. Security was apparently enabled by default on them, and I didn't change them from their default setting. The network diagram in your answer shows exactly what I'm trying to setup: 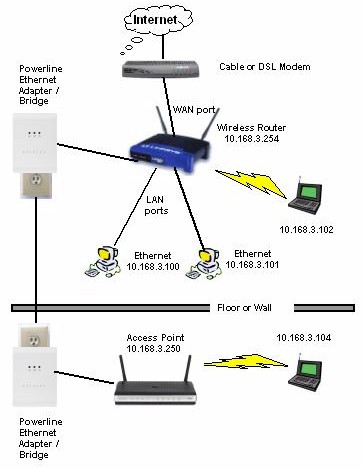 I've followed that guide and I'm still not able to get things working properly. The thing that perplexes me is that wired network traffic works just fine – it's only the wireless traffic that doesn't. This is with the same laptop, and the same DHCP or static IPs.

"2. Have you correctly enabled DHCP on only one of the routers and disabled it on all the others?" Yes I have – only the internet-connected router has DHCP enabled. The IP range for the DHCP is from 192.168.153.11 -> 192.168.153.200. The strange thing is that wired connections work fine on the LAN, plugged into any router, work fine – it's only the wireless connections that aren't working when they're plugged into the non-primary AP.

"Since the routers you are using appear to integrate an ADSL modem I'm assuming there is no WAN port on them." There's no NAT within the LAN, and all wired connections are connected to LAN ports. It's something wrong with the wireless – wired works fine throughout the whole LAN.

The diagram you've drawn in your answer shows pretty much exactly what I'm trying to do. I've spent another evening trying different things and made some progress but I'm still scratching my head. I've borrowed a Netgear access point and been trying with this, and the strange thing is that my PC is working now – this is a Windows 7 PC connected to the access point in the position of where the DG834G is in the diagram. Meanwhile, however, I have an old Powerbook G4 12" I use for music, and while that has a DHCP-assigned IP address, it's not getting any network throughput to either LAN or internet addresses.

To make matters more strange, my phone appears to be intermittently working when it's on the wifi. The access point is a Netgear WPN802v1, DHCP, NAT both switched off, running firmware 2.0.9.0. Last night I set it up with exactly the same settings, and similar to tonight I could get a couple of devices to work, and a couple not to. By the morning, however, everything had stopped working – nothing could get a DHCP IP address. I rebooted the 877W earlier this evening and I'm wondering whether this is why a few things are working now.

"Could it be possible that the issue could be with the 877W?" I didn't configure this – is it possible that the DHCP server only likes assigning devices that are immediately attached to it? Or similar, could a firewall be stopping too many addresses that are coming through one device? (ie. the Access Point) This could explain why devices are working at the start but then not by the end.

In reply to your questions, "1. I looked at the Netgear DG834G support page. There are five versions of this router. Which version do you have? Netgear usually lists this on the label on the bottom of the router. What version of the firmware does it have?"
It's a DG834Gv3, and the firmware is the last on the netgear site version 4.01.40.

"3. Not knowing which version you have, I glanced at the reference manual for the DG834G v3. In the section for Wireless Settings under the subsection Wireless Access Point there is a check box for a Wireless Isolation setting. If you have this setting it should be off/unchecked. If it is checked then any device connected via wireless would not be able to talk to any other device on the LAN. This sounds like your problem so maybe this is the cause?" I've checked this and it's switched off.

I've made a change to the IP of the access point to something outside the DHCP range – it's now 192.158.153.5, with DHCP starting at 11 and going up to 254. Thanks for the tip about this – I only have a few devices so wouldn't anticipate the DHCP server assigning up to 110, but better safe than sorry. Finally one more thing I thought I should add, is with the Powerbook G4 that's not working – it's getting a DHCP IP address and it can communicate with the WPN802 as I can visit the administration page. Anything further than this, however, it can't reach; I can't administrate the 192.168.153.1 (877W router). Strangely, however, when I open Finder on the same powerbook it's detecting my NAS which is attached directly via wire to the 877W. If I try to browse it, it says connection failed.

First off, sorry for the length of this question. I need start to practice a more concise writing style, so I'm going to try to keep this bit brief.

After much fiddling, and with the hugely-appreciated help of irrational John, I have come to the conclusion that it's something wrong with the powerbook.

I believe that this was perhaps the reason I doubted things worked at the very beginning.

I now have the original DG834Gv3 running both wirelessly and wired, and both wired devices and wireless devices get internet connectivity. The only anomaly is the powerbook which I've had to keep wired, as no matter what I do it refuses to work wirelessly.

I still have suspicions that the 877W isn't quite right; I'm fairly sure that if I RJ45 the powerline adapter into a different LAN port on it then everything will break. I've just about run out of patience to test this further, and I think I need to go into the 877W's config to match the 877w's lan port's settings.

I'm accepting irrational John's answer as he's been enormously helpful, way above the call of duty, and for this line he wrote:

Beats the heck out of me.

which in the midst of great frustration made me chuckle, and for a sentence in one of his comments to the same answer:

It was this second sentence that made me put the powerbook aside and concentrate on the other devices that ultimately led me to getting things working.