Since a few weeks, I'm not able to pull or push from or to the remote repository. I thought it happend when upgrading to IntelliJ IDEA 14, but I can reproduce the problem with IDEA 13.1.5 as well.

The tooltip says
"Fetch failed
fatal: Could not read from remote repository."

and the exception in the Version Control tab reads

Using the built-in terminal of IntelliJ, executing git -c core.quotepath=false fetch origin --progress --prune, it works just as it should.

According to the stacktrace, there seems to be a problem with my KnownHosts, so I deleted our git server from ~/.ssh/known_hosts, hoping IntelliJ would insert it again. But the problem still appears when updating via the UI, and there is no new entry written in known_hosts; thinking about some caching of the file, I restarted IntelliJ, without success.

When doing another git fetch from the terminal, now I'm getting asked if I want to permanently add the server. After that, it has been written to known_hosts again, but IntelliJ still won't let me update my project.

I haven't found anything about this behavior online, so I guess it's not a known bug with the new IntelliJ version. Nevertheless, I updated to 14.0.2, but the problem still exists.

IntelliJ is configured to use the built-in SSH executable.

Does anybody have a clue what could be the problem here?

Settings --> Version Control --> Git, and then, in the SSH executable dropdown, choose Native 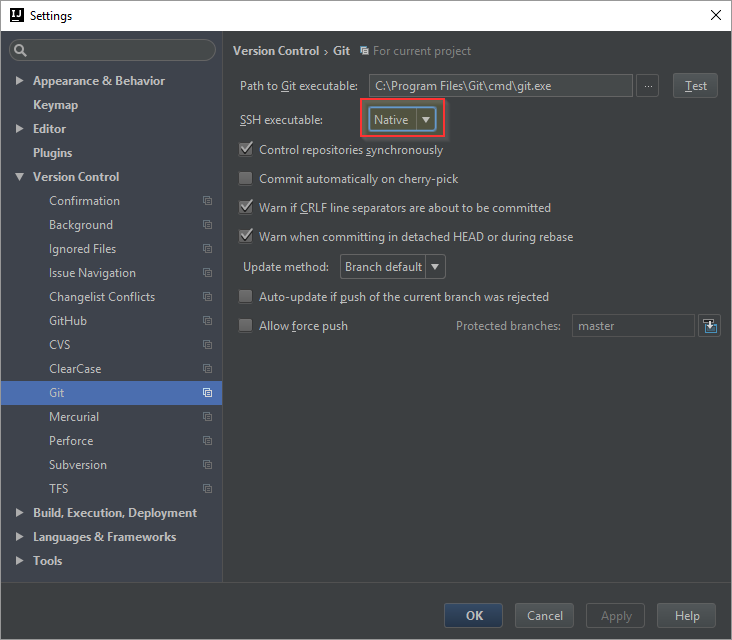 If this doesn't help, ensure that your native ssh and git clients are of a sufficiently recent version.