This is what I have for architecture settings perspective

Recently I updated my OS to Yosemite and Xcode from 6.0 to 6.1. I have searched on Stack Overflow for this question which refer to Xcode 5.1 and tried all the given solutions, but nothing has worked.

Update – I tried the changes as suggested in the answer, but I still keep getting the error which says "Missing required architecture X86_64" . On further investigation I found that the file ClientAuthenticator.o which is from my library is not getting built for X86_64 architecture and probably that is the issue? I am looking how it can be built for x86_64. 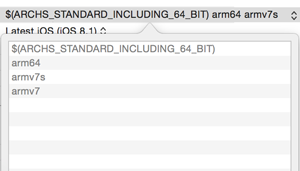 So, armv7s is not needed? Yes. It seems that the general differences between armv7 and armv7s instruction sets are minor. So if you choose not to include armv7s, the targeted armv7 machine code still runs fine on 32 bit A6 devices, and hardly one will notice performance gap. Source