Closed. This question is opinion-based. It is not currently accepting answers.

Want to improve this question? Update the question so it can be answered with facts and citations by editing this post.

(NB: Note the emphasis on the word desktop, so any references to server will not be pertinent to the question and therefore irrelevant)

and after some research on this subject I understand this much:

a. Is ufw the default firewall "configuration tool" for Ubuntu? (note it says configuration tool and not the actual firewall) and ufw is installed, but it is not running and is not configured at all, so it has no default rules set out of the box.

b. Gufw is a UI to ufw, but it's not installed by default, or at least that is the case with Ubuntu Desktop 18.04 LTS.

c. iptables is the actual firewall which is built-in to the kernel as a module.

At this point know I can configure ufw as it's easy as abc, hence its name and to use it, as a starting point, you need to set deny (incoming), allow (outgoing) and start it, I also understand I could use Gufw to do this too. So I could just leave it there and do just that.

However, after all my research, I find many articles, questions and blogs on the subject with many views and opinions, many of them stating that you dont need a firewall, there are no open ports, but I am thinking, surely some ports must open when I connect to the internet? which means I am connecting my device to a network and opening up a two way traffic connection, but all the information I have read only serves to make this unclear and ambigous, so I digest all that information and try to make sense of it then reduce it down to a single statement and so a nutshell I summise:

Ubuntu desktop users don't need ufw since it's merely a configuration tool for iptables which is the actual firewall under the hood.

So say I take the above statement literally, then is the following statement true?:

iptables is the built in firewall for Ubuntu Desktop and is fully configured and up and running out of the box with default rules that are sufficiently secure for the average desktop user.

Because if the above is true, then what would be the point in ufw except to provide an uncomplicated interface to iptables, which by all accounts is complicated and furthermore the experts advise you to avoid configuring iptables directly since if you don't know exactly what you are doing, you could easily render your system insecure or unusable, if it is misconfigured?

Here is an nmap scan of my system along with my firewall config, showing the open ports on my system: 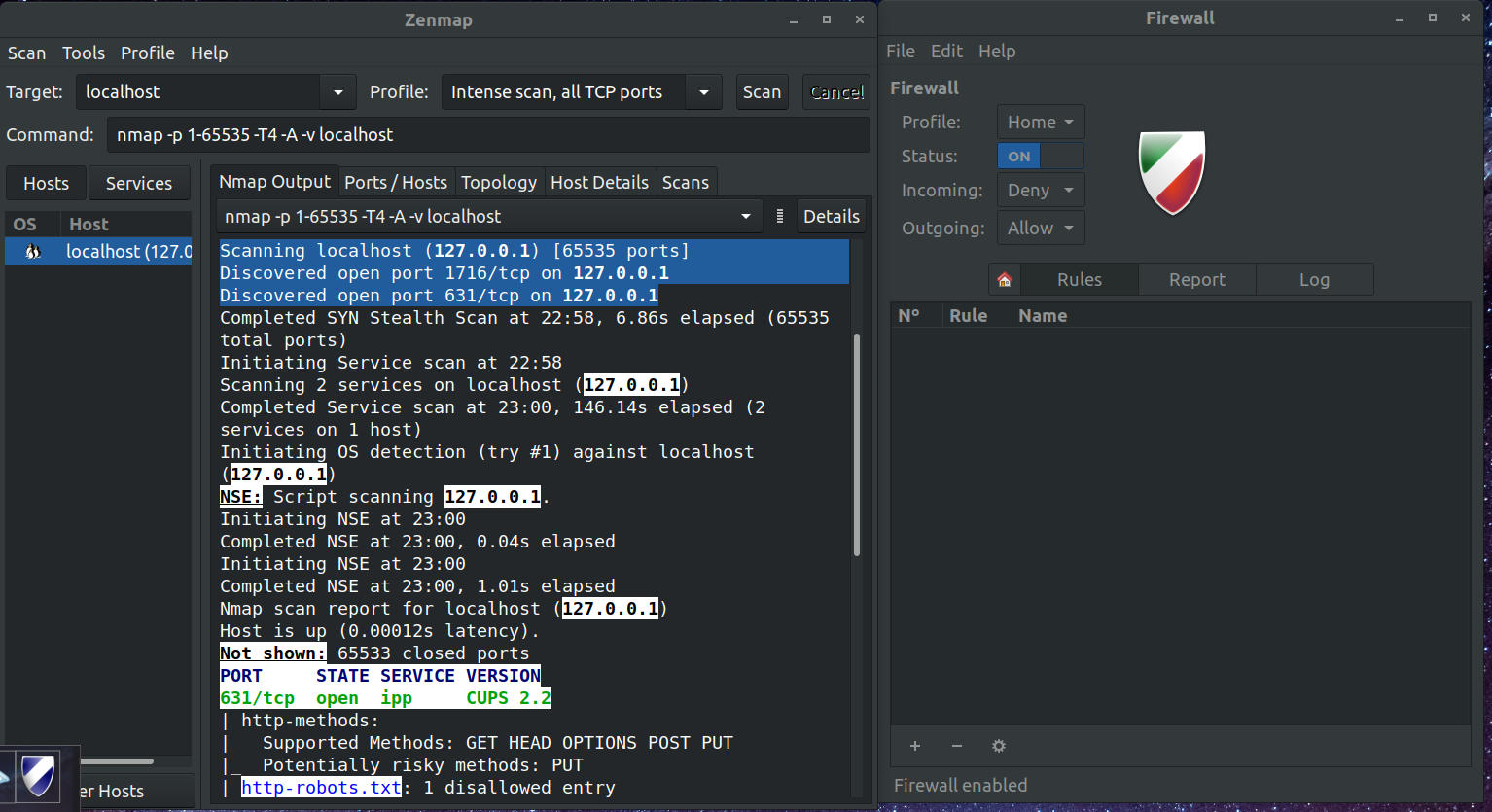 Please could someone provide a concise, relevant and non-opinion, fact based answer 🙂

As a new Ubuntu desktop 18.04 LTS user, do I need to use ufw for a firewall or is iptables sufficient?

Most home Ubuntu users don't need to or use ufw. Both ufw and iptables are installed by default and are configured to do nothing. Why there is no need, is explained in more detail below.

So say I take the above statement literally, then is the following statement true?:

iptables is the built in firewall for Ubuntu Desktop and is fully configured and up and running out of the box with default rules that are sufficiently secure for the average desktop user namely deny (incoming), allow (outgoing).

The statement is false

iptables is the built in firewall for Ubuntu Desktop

The above part is true.

Now let's look at the other part:

iptables is fully configured and up and running out of the box with default rules that are sufficiently secure for the average desktop user namely deny (incoming), allow (outgoing).

The above part is false.

Default Ubuntu desktop installation has no ports open, and no servers running. Therefore, even though iptables come installed by default in desktop Ubuntu it is not configured to do anything. That is, the default firewall has not rules set.

Thus, iptable is configured to do nothing when you install Ubuntu.

The gufw screenshot shows that there is no firewall rules setup. However, since you installed gufw and clicked on it, ufw is also installed (gufw uses ufw) and ufw is active. The default ufw configuration you mentioned above, deny (incoming) and allow (outgoing) is working. However, these rules don't apply to the computer itself, that is 127.0.0.1. This is (not necessary but) sufficient for a home user.

Default Ubuntu desktop installation has no ports open, and no servers running. Therefore if you don't run any server daemon, such as ssh server, you don't need any firewall. Thus, iptable is configured to do nothing when you install Ubuntu. See Do I need to activate the firewall? I only use Ubuntu for a home desktop use? for details.

If you run servers you need a firewall

If you are not an average home user, and want to do some advanced things, such as remotely access your desktop by ssh or run some other services, then you need a firewall. Your configuration of the firewall will depend on which server daemons you plan to run.

Even if you don't plan to run a server you may want a firewall with the default configuration of deny all incoming connections from all ports. This is to be doubly safe, in case, one day you want to install and run a server without realizing what you are doing. Without changing the default firewall configuration the server won't work as expected. You will scratch your head for hours before remembering that you activated the firewall. Then you may want to uninstall the server software, as it may not be worth the risk. Or you may want to configure the firewall to let the server work.

gufw is a GUI interface for ufw, which in turn configures the iptables. Since you have been using Linux since 1990s, you may be comfortable with the command line or you may prefer the visual cues of a GUI. If you like a GUI, then use gufw. It is easy to understand and configure even for a novice.

If you like the command line, ufw is easy enough.

iptables is not so easy

The reason we don't want anyone to fiddle directly with the iptables, and use ufw or gufw is because, it is very easy to mess up iptables and once you do, the system can break so badly that it may be unusable. The iptables-apply command has some built-in safeguards to protect the users from their mistakes.