I believe I've tried all proposed solutions for other questions involving the Broadcom BCM4352 wifi hardware, but on a fresh install of Ubuntu 16.10 on a Dell XPS 13 9343 (2015) I cannot get the system to recognise the device.

Output of rfkill list all (only bluetooth is recognised, not wifi):

Secure boot is disabled in the BIOS:

Wifi hardware is not shown in the Network Manager indicator: 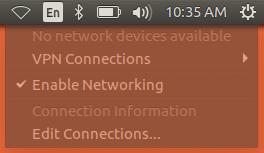 I have selected bcmwl-kernel-source from the additional drivers application:

The wl module is loaded and and I have tried removing and reloading it.

I have also tried unloading wl, uninstalling and purging bcmwl-kernel-source and installing firmware-b43-installer and b43-fwcutter, but the problem remains the same.

The wireless hardware works in Windows 10 and older versions of Ubuntu up until 16.04 so there is no question of a hardware fault.

What else can I try to get the device working or debug the problem?