I followed the following guide looking for a way to solve at last an issue I have been having in 17.10 (Worked in 17.04 but I can't confirm if it did all the time).

The issue can be found in https://ubuntuforums.org/showthread.php?t=2356217 but basically, the Intel ethernet card, suddenly stopped connecting. It simply does not detect an ethernet connection established.

I have physically tried connecting several LAN RJ45 cables to it (Changing between 4 that I know work because they work in other computers at home). I also tried testing it between my computer and an Asus RT5300 and an Asus AC-68U. Currently it is connected directly to a Netgear Orbi (The router) and it does not work (I tried another computer to the same port in the Orbi and it works perfect).

Dmesg mentions the following about the card:

And the Gnome Network GUI shows this:

Trying to compile the same drivers, following the guide above gave me this (after editing the nvm.c file as mentioned in the guide):

My computer is the following: 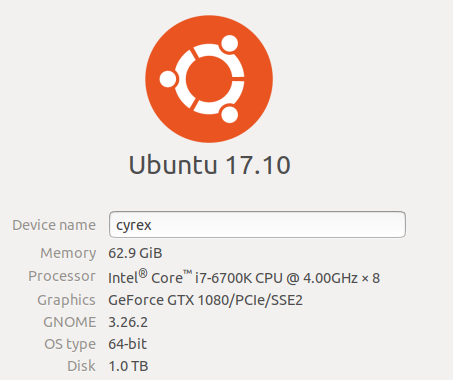 The motherboard is the Asus ROG-Maximus VIII Hero Alpha with the latest 3703 firmware update.

I have literally tried a lot of things over the past months with no luck, including the recommendations mentioned here Ethernet adapter was disable on Ubuntu 17.04

The ubuntuforums link that you followed is a technique to patch the driver to ignore an NVM Checksum error. This error prevents the driver from loading at all. The first symptom is that the device appears as unclaimed in lshw. As well, the error is quite apparent in dmesg; it usually manifests like:

Since the driver won’t load, no interface such as your enp0s31f6 is created.

Incidentally, for the benefit of the searchers, there are much easier ways than hacking the driver to solve the NVM Checksum error. Please see: https://ubuntuforums.org/showthread.php?t=2351572 Essentially, it involves downloading a bit of code from Intel and running it to tell the hardware that the checksum it has is correct. Afterwards, the driver sees no checksum error, loads and runs.

It is not productive, in my opinion, to apply the checksum fix in a setting where no checksum error is evident.

In your case, I suggest that you run:

I suspect you will find, in part:

You could try telling the interface what speed and duplex to assume to see if it is helpful:

Does the interface spring to life? If so, we can make the parameters persistent.

If none of this helps, as I strongly suspect, then I believe that the ethernet jack on the motherboard or one or more of the PCB traces to the actual chip is defective.

Intel gigabit ethernet cards are inexpensive and readily available. I suggest that you abandon the defective on-board chip.