What I want is to create a bootable pen drive that shows GRUB menu and I can select any of the several bootable systems from there to install/run. I have several ISO images that I want to install in the USB like Ubuntu, Fedora, System Rescue CD, Windows XP and Windows 7 (The windows versions are optional, mostly am looking for a multi installer for Linux distros, specially Ubuntu version)

The default Startup Disk Creator only works with Linux Images and only 1 at a time (At least for the mean time. If it allows more systems and multiple ISOs it would be awesome)

What method exists that I can use step by step to create a bootable USB Drive with multiple images than can be booted from the USB and selected from GRUB. It must support Windows Images and Linux Images.

Alternatively, is there also a way to have multiple versions of the Ubuntu installation ISO on same USB Drive, such as, when booting from it, I get to choose what Ubuntu version and architecture to install, for example:

UPDATE: Wanted to add that the English version for the post mentioned by daithib8 is here: MultiSystem – Create a MultiBoot USB from Linux | USB Pen Drive Linux

"After googling around for few days i found this useful script from www.multicd.tuxfamily.org. Multicd.sh is a shell script written by maybeway36 which enables two or more Live Linux distros / utilities to be able to boot from single CD/DVD. It is really very simple to create multi Live Linux distro in a single disc. Create a folder in your home folder and name it as multicd. Put all the live Linux iso images along with multicd.sh script inside multicd folder. Close the window. Open terminal and give the following commands

Above commands will execute multicd.sh. While executing, this script will download few packages from Internet and make a new iso image called multicd.iso for you inside multicd folder. Check the size of multicd.iso image file. If it exceeds more than 700 mb then you must insert DVD to write it. Choose burn image option from your favorite image burning software to write multicd.iso file. Upon reboot, with the CD/DVD present inside CD/DVD drive, new GRUB will display list of live distros available in the disc. Choose your favorite one to login...

Note: When you download any Linux iso image from internet it will look like this "ubuntu-9.04-desktop-i386" but this has to be renamed as ubuntu.iso (inside multicd folder). Presently this script supports 20 live distros. List of Live Linux distros supported in this script are given below (and the names accepted by this script are on the right side of each distro)."

There's a list of distro's on the blog page.

allows you to create bootable Live USB drives for Ubuntu, Fedora, and other Linux distributions without burning a CD. It runs on Windows, Linux, and Mac OS X. You can either let UNetbootin download one of the many distributions supported out-of-the-box for you, or supply your own Linux .iso file if you've already downloaded one or your preferred distribution isn't on the list.

If you look at them image you can choose distro's or download ISO's yourself and add them or add a custom. And you can set this up on a hard disc or a USB flash drive. 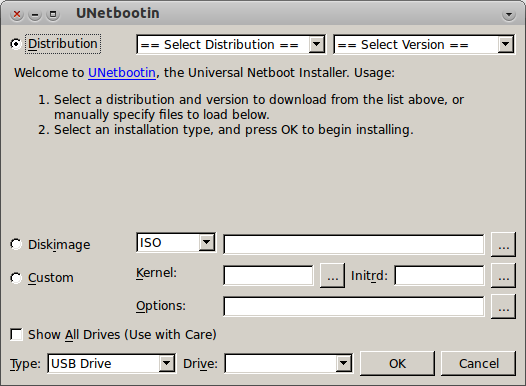 I hope it is enough information but there is a lot more info on this blog.