I am trying to share my wireless connection with my XBox 360 (which does not have a wireless adapter) via ethernet cable. I thought there once was a sharing option in Network Manager (it has been some time since I've last used Ubuntu) but it appears to be conveniently removed. I've looked and looked across endless results in Google on the subject and they all seem to point to using this missing option.

Since they seem to have broken Ubuntu 11.10 in so many ways, how can I configure this manually? I've tried switching to XFCE but it still uses the same application when I go to edit connections.

Set it to share as per below. It's not able to get a connection. The XBox connection test dies before the Network icon. Also, to make it more interesting, the wireless connection disconnects and reconnects in rapid succession as long as sharing is enabled.

I haven't done this yet on my own, but I think you are searching for this: 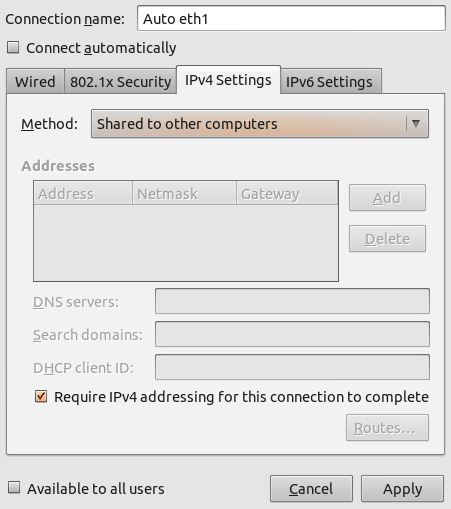