Ever had a time when it seemed that part of your screen couldn't figure out quite what it wanted to display? If so, you'll probably be able to help me out on this question.

I have an HP Elitebook 850 laptop running Ubuntu 16.04 LTS (64-bit), and the HP docking station, which provides another VGA output port. For a while, I used a Dell 2007FPb (1280×1024) monitor on that port (in the portrait configuration) with no Ubuntu issues (though the monitor itself had some major issues, causing it to frequently restart itself). Today, I replaced that monitor with an Acer AL2216W (1680×1050), ALSO in the portrait configuration (using this for reading music, etc.) It seems to me that the issue has to do with the taller screen (1680 vs 1280 pixels high) and Ubuntu memory allocation.

The problem: the bottom portion of the second screen (in portrait mode) constantly "flickers" randomly between what should be displayed, and something that used to be displayed. (After a random period of minutes, this mysterious "second buffer" eventually matches the screen…until I change it again.) I've tried moving the second monitor's configured location (in Displays) all around, but only succeeding in moving the location of the problem area on the second screen. This is not a hardware problem, as it shows up in screenshots: here's a screenshot of the problem: 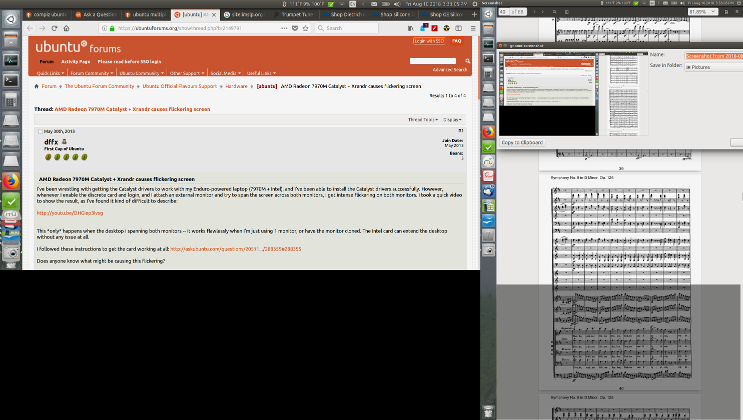 Note that the affected area starts 1,138 pixels down from the top of the 2nd screen (only 58 pixels below the 1,080-pixel main screen). Not sure if that means anything or not.

How did I get the above screenshot? Well, when I press the "screenshot" button, Ubuntu quickly "fades" both screens from black back to normal, and one of the "faded" steps starts flickering randomly on the lower portion of the second screen (main screen is fine). Here a few minutes later, it's still flickering that "faded" step; if I scroll the document on the second screen, it'll start flickering back and forth between what used to be displayed there and the new material. Which poses quite a problem for the music I'm trying to read on that monitor!

It doesn't make any difference what program I use (in other words, it's not the Document Viewer at fault here)…if I "restore" the window to a smaller size, the affected area keeps flashing between what it should display and what it used to be displaying. It constantly flickers back and forth between the two, just like a bad connection in a wire (which it isn't if I can use screen capture to get a picture of it!)

Here's my monitor setup in Displays: 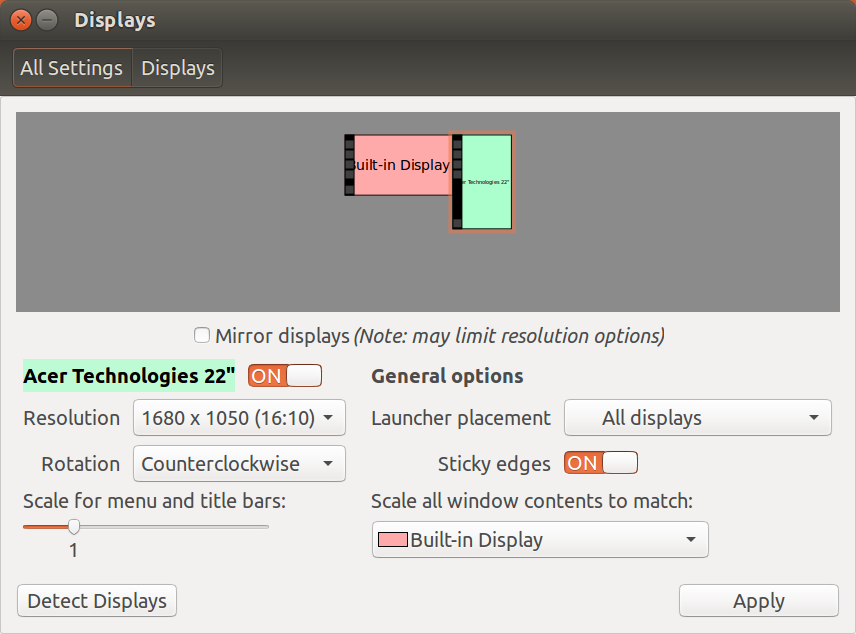 I have not installed any drivers or other video software–these are plug-and-play Ubuntu 16.04 drivers. Any suggestions?