I have Ubuntu 12.04 installed and I am using a mobile broadband connection, so bandwidth is precious. What I would like to do is to enable only security updates.

Then when version 12.04.1 is released (which it already is), download it over a different connection (probably not on an Ubuntu machine) and burn it to disk, and then use it to update the system.

The alternate CD is actually a mini-apt repository. You can download the point release alternate CD and then insert it into the machine while it is booted up, after burning it.

Then go to Software Center-> Software Sources and use the Add Volume button to add the CD. 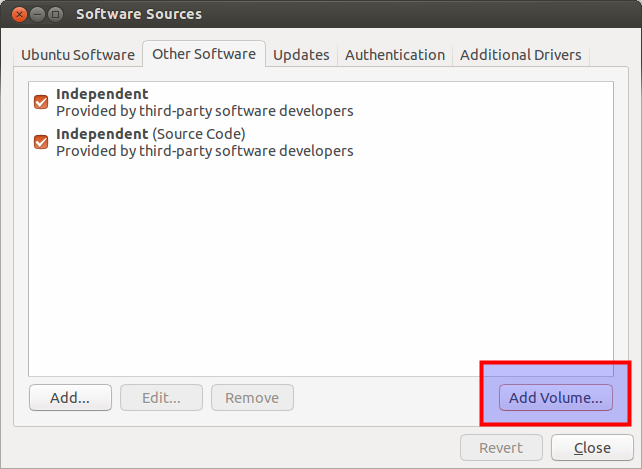 This will work, but the CD does not contain every package which might be installed on your system, as it only contains what is needed to get a working system(except for some drivers). You still need to update any other packages you want to update using your internet connection(s).

The default packages (and a few more) will be updated to the point release version. These non-default packages were on the CD as they are commonly installed, but not installed by default. These may include common drivers.

For Quantal and later:

Quantal no longer has an alternate CD. You can, however, use AptOnCD as follows:

Download aptoncd on a Ubuntu machine (of the same version and architecture(32/64-bit)) with a fast internet connection and install it:

And use the update manager to update packages. You can also select packages with:

which should get packages and dependencies into the apt cache. You can then create an aptoncd CD and burn it with the packages it gives you from the selection. You can select any package that has been downloaded since the last sudo apt-get autoclean operation.